here we are at the end of the story
and in this adaptation, the wicked stepmother is simply gone
when the children return, having foiled the witch with a chicken bone
and pushed her into the oven, they abandon the gingerbread house
are led home by the traitorous birds who ate the breadcrumb trail
laid down in lieu of the white pebbles the stepmother found
caught them trembling like eggs under the moon
and now the children are gobbled up in the arms of their father
who is so glad to see them alive, and who has dismissed his wife
in some mysterious fashion, and they all live happily ever after

but I want to know where the stepmother is
if she is buried at the foreboding treeline, beside the stumps and axe
or was driven away by the husband with her own crust of bread in the night
she who boiled down children to care for to mouths to feed
if she was always a rough blade or if her soft parts were filed down
against the whetstone of being a poor woodcutter’s wife and not-quite-
mother to his children who are old enough to not need her
except to feed their mouths and sweep the crumbs and most certainly
grunt quietly in the dark in the too-small cottage to keep their father
from becoming the frightening archetype of a different bedtime story

she couldn’t have been all sharp edges, if they wanted to come home
had she been nothing but a whispered reminder in father’s ear
of their perpetual hunger, if father could be convinced
to leave his young to succumb to poison berries and wolves
and cold, surely they wouldn’t have schemed and
cooked a woman to come back, when they could have stayed
in the house made of food, and grown fat and content together,
yet here they rejoice when they find their father in the yard
and not raw-voiced calling their names through the forest
and do not ask if he felled her like a shaking tree, just empty full
pockets of gold coins and jewels, pour them now like an offering
rubies glowing under the sun, spilling red across his hands 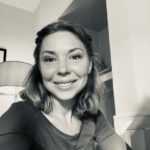 Kristin Indorato lives in Nashville, Tennessee, with her musician husband and their son and dog. Her poetry has appeared in 3Elements Review and Barren Magazine. Her photography has appeared in Humana Obscura.