She wasn’t even mine, I had to borrow her.
In her likeness, we wore cheap brass chains
and scarlet mouths honied with plausible lies.
That woman spent her days letting the garden rot
the pumpkins cave in upon stalks, field mice grow thin.
When the soil thwarted her, sending up heady stalks
she hired men to pave the plot. From her bitterness
we tasted ordinary sins, from her etiolated beauty
life’s mockery. The queen appeared in every hand.
After she shuffled the world stopped for a moment
sucking in its cheeks—what insatiable greed
what diamonds of sky and whiskey glass.
She left the other’s photos on the wall to fade
tossed cigarette ends into the furzed canyon
where the music made by night and day
seemed meant only for her, those eyes tinged
the color of Indian tea in a pale saucer.
Who thought her a great actress: but after all
she knew the role, the curses and the paisley silks. 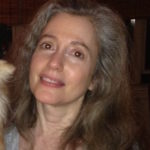