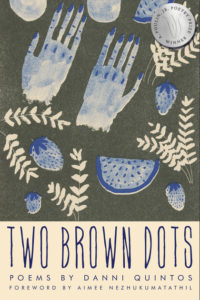 As I write, it is late June 2022. We are reminded more each day of the perils of living in a female body, of the constant scrutiny. Perhaps that is why it feels fitting that Two Brown Dots, penned by Danni Quintos, opens under the watchful eye of the male gaze, one protective––the father––the other threatening––a serial killer. Fitting too is the fact that this poem, “Portrait of My Dad Through a Tent Window,” introduces the question of the racialized body from the outset, with a police officer checking the photo of the killer several times “to make sure my brown dad with long hair wasn’t him.” This collection, chosen by Aimee Nezhukumatathil for the A. Poulin, Jr. Poetry Prize, explores what it means to live in a biracial, female body, as well as the desire to belong, to find one’s place.

In the first of the book’s three sections, “Girlhood,” daughters of the 80s and 90s especially will recognize references to popular music and hit films, as well as the world of sleepovers, MASH games, schoolyard crushes, and awkward sexual encounters. The male gaze occasionally returns, sometimes acting unimpressed, as in “Boobs,” the poem that gives the collection its title:

and Elliott Fess saw my shirt fly up to my chin. I’d forgotten
we were different now. When I asked, did you see anything?

he said, just two brown dots. I wanted him to feel embarrassed
or changed by the sight of me. Or maybe to see me as a girl, a body.

The adjective “brown” tells us this is more than the typical story of adolescent heartache and angst. Other children perpetrate acts of everyday racism in “Scary Spice,” “Letter to My Childhood Crush,” “The Rules,” Brown Girls,” “Sixth-Grade Invisibility Studies,” “Who I Wanted to Be Instead,” and “The Worst Part of Riding the Bus.” On top of that, in “On Being Asked to Represent Your Country” and “Mispronunciation,” adults behave as badly or worse.

The body becomes “foreign” in other ways in the second section, “Motherhood,” which takes us through a series of poems that sometimes present unexpected twists, for example the food cravings in “Luteal Phase Ends” or the “marble” in the speaker’s chest, which transmutes from the breast buds of “Boobs” into the threat of cancer in “Breast Lump.” This section is not just about new life; it is also about disease, from cancer to COVID, complete with vivid anecdotes and observations from the speaker’s “lola” (Filipina grandmother). The section concludes with the five-part epistolary poem “Letters to Imelda Marcos,” that explores a scourge of a different kind in its contrasting images of privilege and poverty.

These images provide a fitting segue to the final section, “Folklore,” in which the speaker explores more deeply what it means to be half-Filipina. The speaker lashes out at racist, anti-Asian jokes in the United States in poems such as “Ghazal for Dogeaters,” then subverts one such joke in “How the Filipino Got Their Stereotype.” In “Self-Portrait as Manananggal,” the speaker imagines herself as a creature from Filipino mythology, fighting for her place in both the Philippines and the United States. She writes:

[…] In the Philippines, they deter me with seasoning: salt, garlic, ash;
they reflect me ghostly on billboards, erase my melanin with papaya soap &
Photoshop. Here, I am repelled by questions, mispronunciation, fetish, &
the phrase I know how it feels to be. . .

In addition to prose poems, there are free verse poems, along with two haibuns, a ghazal, and experiments in form. “Trying,” which opens the second section, uses the exclamatory repetition of “O” to evoke orgasm, as well as ovum, ovary, and also zero, or absence. In a different vein, “The Mix CD I Made When I Was Sixteen” plays with form by combining a list poem made up of song titles with a description of joyriding in a pickup truck. Quintos coins new verbs, such as “teenage around” and “monstered,” and employs untranslated Filipino words that add layers of meaning throughout the book.

I just finished my fourth reading of Two Brown Dots, and it won’t be the last. It is just that good, both thematically and in terms of poetic craft, the kind of book you want to share with all your friends.

Laura Dennis is a college professor in Appalachia and co-editor of book review for Mom Egg Review. Her book reviews and creative non-fiction pieces have been published in a variety of outlets, including MER Vox Quarterly, Still, Change Seven, Bethlehem Writer’s Roundtable, and Kentucky Philological Review.