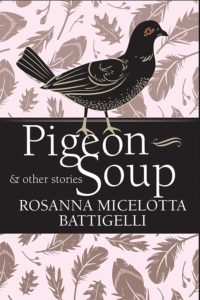 Pigeon Soup and Other Stories is a slim volume of interconnected short stories set in the 1970s in Canada that gives us a glimpse into the first-generation post-WWII Italian immigrants and their second-generation Canadian children. As in most immigrant families, the “Old World” and the “New World” do battle as the older generation seeks to understand the younger assimilated generation. Sometimes generations are blind to each other’s challenges and needs, and at other times these characters understand each other silently and completely. Rosanna Micelotta Battigelli, the author of several children’s books, romance novels and the historical novel, La Brigantessa (Inanna Publications 2018, and an IPPY Award Gold Medalist for Historical Fiction), adeptly handles the short story form, drawing out both the slight moments of recognition and the larger traumatic confrontations with precision, warmth, and a clear eye. The collection was recently named a finalist in the 2022 International Book Awards, Short Story, and the 2021 American Book Fest Best Book Awards for short fiction.

The story “Francesca’s Ways” demonstrates the quiet effectiveness of Battigelli’s story telling. In it, she creates full-blooded characters with a few brief strokes of detail and dialogue. The mother and her grown daughter are making fresh sausages, a task that usually fell to the father of the family. The daughter, Angie, is the second-generation divorced adult child. Francesca, the first-generation mother, we learn, is newly widowed. As Angie observes, her mother’s heart “is still in L’Italia Bella.” She disapproves of her daughter’s modern Canadian choices, while her daughter marvels at her mother’s ability to remain the stern taskmaster of Old-World traditions. Though Angie is dying to escape her mother’s disapproval,  she looks down and realizes Francesca is wearing an old pair of the deceased father’s slippers. She suddenly understands why Francesca has started the old conversation about Angie’s divorce: her parents had had a happy marriage and her mother is still in mourning. As the title of the collection suggests, foodways represent the language of union and understanding as well as in some of the stories here, the language of difference. The mother’s truce to the daughter, a cup of minestrone “like nonna used to make for you” acts as declaration of their unflappable connection.

The collection delves into other issues of contemporary life as well, but Battigelli never suggests it’s an easy negotiation or that there will be a happy resolution. “This Too Shall Pass,” is a brave and well-told story narrated from the point of view of college-age Angelo Leone. On a return home from college, he confronts the abuser of his high school years, Father Joel, who has been welcomed into the family home by Angelo’s well-meaning Catholic parents. The triumph of this story is that it remains within the perspective of the troubled Angelo and operates completely within the parameters of what would have been understood in the 1970s about pedophilia. No one gets their due in this story, and we learn by the end that the offending priest dies without his terrible secret being publicly exposed. Without getting preachy or prophetic, the story illustrates how the mores of the time allowed the abuse to continue in plain sight.

“Alligator Shoes” is a heartbreaking fable of the psychological tolls faced by newly arrived families desperate to fit in.  In just a few pages, Battigelli sketches out the chilling aftermath of the initially “harmless” teasing of a young girl’s “shiny, faux alligator look” shoes, a gift from her aunt, straight from Italy. The tale blooms into tragedy for Sina, and for those who come into contact with her bully years later.

In the final story, “Black as Tar,” perspectives shift and we get a glimpse of how an “Eye-talian” immigrant woman is perceived by her neighbors, the flurry of gossip that surrounds her, and the ways in which characters can grow and learn from each other, despite their cultural differences. Altogether, Pigeon Soup & Other Stories resists sentimentalizing or romanticizing the Italian Canadian characters or the immigrant experience. Battigelli offers us a glimpse of 1970s culture when the language surrounding some of the traumas she describes have just begun to shake our foundations, and she offers us stories and characters who defend themselves as best they can through family ties and at times, despite them.