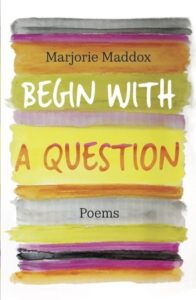 What is the question in question? We are left to formulate and to pose it ourselves, and yet the poetic texts of Marjorie Maddox’s Begin with a Question leave the reader certain that the endeavor is worth taking up.

A professor of English and creative writing at Lock Haven University and an editor of Presence: A Journal of Catholic Poetry, Maddox has been celebrated within and beyond the world of religiously themed poetry for her probing insight and nimble wit. Her previous work spans a wide range, from topical poetry—on baseball, current events, education, emotion, zoology—to in-depth meditative works on marriage, embodiment, and spiritual devotion. Among other honors, her writing has received awards from Cornell, the Academy of American Poets, and Seattle Review and America magazines, as well as the Paumanok Poetry Award and multiple nominations for Pushcart and other prizes.

Maddox’s characteristic breadth of responsiveness and curiosity persists in Begin with a Question. Maddox as poetic receiver appears to be browsing in the garden of theme, plucking what appeals to her and offering it to the reader seemingly at random. The effect can be diverting, as in “Continuous Play,” or profound, as in “Pre-Pietà,” which imagines Eve grieving over her slain grown son Abel.

At times a prosaic meandering (perhaps purposefully employed as such) overtakes the verse line, which Maddox’s speaker acknowledges to be plying the bounds of form in the humorous “A Dog Is Not A Baby”: “A poem is not an essay. Or it is, / waiting to be pushed outside this house of lines.” At other times the verse flirts with form’s more recognizably delineated traditions, as in the delicious “Picking Blueberries at the Convent.” As a reader, I prefer Maddox’s formal sorties to those poems in which language scatters across the page in unsettling fragments or stairstepped indentations; I come to poetry in search of undiscovered syntheses, crystallizations of meaning, in short the work that formal verse does best. Yet those who come primarily for a “deepening of mystery” will also find much to appreciate in Maddox’s new work.

Much of the value of this volume rests simply in Maddox’s sane, steady, accompanying tones of voice, which guide the reader through unaccustomed days and contrasts of upheaval and placidity, deprivation and gift. Where, for example, a Czeslaw Milosz would simultaneously grieve and marvel over the gulf between the tragedies of capital-H History and the stubborn persistence of the seemingly oblivious multitudes—torn between the poet’s desire to wonder over beauty and the poet’s duty to witness to wrong—Maddox seems to aspire to a more Dickinsonian scope of enterprise, in theme if not in form. Her abstraction tends toward the interior rather than the World-Historical; her use of image is more diffuse, less freighted; the meaning to be found is to be found in the totality of experience as much as in the isolated moment. Which is not to say Maddox is disengaged from larger questions—her narrator at one point marches “for others’ rights,” at many others reflects on human ills such as domestic abuse, religious hypocrisy, and technological distortion of reality. But her scale of values operates differently from Milosz’s: weighted more toward the personal and intimate, the quotidian and interior, as forces that can reconcile potential tensions.

An exception is the painfully dazzling “Epiphany,” a sonnet that explores how far and how fast America’s fault lines of political division have shifted over the past several years, so that “the ones we loathe and love may be the same” without our fully realizing the extent of our separation. In the abrupt failures of sympathy the riot occasions, “we find the manger bare” on the titular feast day—the very day that ought to bring us closer to the Reconciler of all things. Until we address the unrest in our polis, faith’s unions and resolutions, Maddox implies, will also continue to elude us. Here Maddox offers no simplistic solution, no easy escape: Civic and spiritual responsibilities are explored in their complex interrelation, at the same time that a nationalism cloaking itself in the trappings of religion is revealed to be a dead end.

Still, if the book embraces an overarching argument, implicit or otherwise, we could submit that that argument runs like this: Argument alone will not take us as far as the heart wants to travel. Hopeful and humane, Maddox’s poetry is anything but naïve in the face of contemporary life’s evils. It faces the future at a slant and invites us not to be afraid as it angles us toward an eternal perspective that will “Begin / where there is no beginning”—not with a question but with an inexhaustible mystery, into which Maddox extends a gentle invitation to explore.

Katy Carl is editor in chief of Dappled Things magazine and author of As Earth Without Water (Wiseblood Books, 2021) and a devotional book on the O Antiphons (Catholic Truth Society, 2021). She is pursuing her MFA in fiction at the University of St. Thomas—Houston.