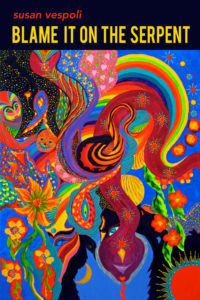 The uncharted territory of parenthood is both wildly unforgiving and rewarding. With Blame It on the Serpent, Susan Vespoli explores the joys, fears, and sorrows of parenting. Traversing time and place, she threads together an affecting contemplation of her identity as a mother through the lens of raw pain, from divorce or blistering conflicts with addiction, amid her children’s coming-of-age.

Vespoli earned an MFA in Creative Writing after a “mid-life explosion.” She is a Pushcart Prize nominee and author of two chapbooks. A mother who deeply loved her children while bearing the burdens and scars of rearing them, Vespoli’s poems reconcile these experiences, contrasting the mundane with the extraordinary. Vespoli admits the power of writing helps maintain her sanity while deciphering “the zaniness of the world.”

With her reflections, Vespoli challenges us to recognize the oscillations of parental love despite punishing circumstances or painful outcomes. A spectrum of emotions tumbles forth onto the page with each measured, layered poem. Even the untitled poem in the opening pages immediately gut punches with its blunt revelation of parent’s love that’s so strong “…you would throw yourself/in front of an incoming missile to protect them” because children cannot comprehend “…what dangers/lurk in the belly of the world.”

Her observations of poisonous repercussions from drugs and potentially losing a child forever are perhaps Vespoli’s most fervent poems that demand our attention. She conjures the deep-rooted fears of external harms that contract our world inward, constricting lives. In “Chicken,” Vespoli juxtaposes the harrowing deterioration of an opioid-addicted son with the surprising “magic” of a “golden hen” appearing in her backyard one day. It’s a bittersweet moment when the hen eventually trusts Vespoli before disappearing, leaving her in empty sorrow again.

The powerful lamentation for the troubled child is in startling contrast to the simultaneous embrace of an innocent creature. Similarly, in “Bless the Bee,” Vespoli conveys unspoken agonies of witnessing a grown son who was once a “…baby with skin so sensitive,” now with “Ziploc-bagged drugs in his dresser” he barely attempts to hide while uttering untruthfully “…I’m fine, Mom/without really looking at her.”

In “3 AM Sonnet,” the speaker in the poem envisages her daughter slipping away and plunges helplessly into a profoundly fearful dream.

But then, asleep, it comes again: the dream
I’m standing on a shore, some beach at night
and see my daughter floating out to sea
I scream her name, she’s silent, drifts from sight

“I Dream of Him Somersaulting Underwater” evokes imagery of innocent children swimming freely in the summer, before the world’s venom tarnishes them. Vespoli cherishes the memory, wanting to trap it forever.

With “After the Divorce,” Vespoli channels the desolation following failed marriage, “but you will be swallowed by a stillness/like diving underwater to swim the length/of a pool, a quiet so loud it throbs.” Her poems shift tone from the chaotic, anguish-filled years of motherhood and marriage to joyous embrace of being a grandmother. “Sonogram” beautifully encapsulates the years-long transition of her daughter. She begins:

Her daughter’s maturity from rebellious teen discovering boys and smoking comes full circle to womanhood as Vespoli welcomes the expected gift of a granddaughter.

…until if finally folded back up, resting
in the cupped palm of the woman
who smiles at me from an exam table
with her eyes as bright as a camera flash
at the blip, blip, blip of a lit star that will be Molly.

Finally, “Haiku for Missing my Granddaughter” is a heartbreaking testament to any grandparent longing to see and spend time with their grandchild.

I’m five states away
from she who twirls in socks, asks:
wanna dance with me?

Bound in a beautifully bold, exotic cover evoking the hypnotic reverie of the Garden of Eden, Blame It on the Serpent is an arresting, genuine book of truths for parents crippled by the terrible forces attempting to steal our children away. But, as Vespoli reminds us, our unconditional love is truly resilient and what ultimately protects them.