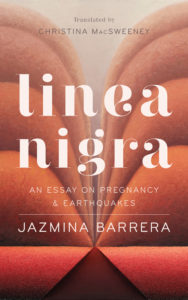 As is custom, Jazmina Barrera’s latest work begins with a dedication: “To whom it concerns (Silvestre, Alejandro, and Tere) and to whomsoever it may concern.” That last phrase captures a subtle proposition, that the contents of Linea Nigra: An Essay on Pregnancy & Earthquakes likely involve all of us, whether child or parent. Translated by Christina MacSweeney, the book and its subject matter are indeed universal, with undulating musings that sooth and sustain, like a lullaby.

The result is a candid meditation on pregnancy, childbirth, and new motherhood, in the midst of natural disaster, writing obligations, and matters centered both in and outside of the home. Barrera seamlessly juxtaposes the quotidian—grabbing a shower between breastfeeding and her baby’s naps, for example—with the abstract, existential issues of carrying a child in the womb: “[We are as] together as it’s possible to be: one in the center of the other.” The revealing passages embrace the richness of this phase of her life in an authentic, holistic way, neither painting a Hallmark picture of absolute bliss nor one of interminable misery. The material is elegantly layered, as Barrera deftly manages the juggling act of maintaining the tone of an objective observer, while enlivening the work with the intimacy of her own subjective experience. She avoids the usual tropes and sentimentality, finding fresh, original connections to art, literature, and her own experience, as well as that of her friends and family.

Linea Nigra is structured into four parts, as Barrera takes readers on a journey through early pregnancy, labor and delivery, caring for a newborn, and her son’s early toddlerhood. She weaves her story with brief yet impactful fragments, a style that mirrors writer Susan Griffin’s comment, quoted in the book, about the “brief illuminations” that happen amidst the interruptions inherent in a parent’s daily round.

The book begins with Barrera exploring the phenomenon of pregnancy, investigating the shapeshifting occurring within her. Although she recognizes the universality of the experience, she still has “a hard time believing that almost half of the human race has gone through this.” She considers the mystery of her condition with original insights and thought patterns. When she learns the baby’s gender, for example, she thinks, “for a few months I’m going to be both a woman and a very small boy.”

Some aspects of the book are written with a focus on the unborn baby’s point of view. “When I think about what the world is like from the perspective of the uterus, I remember those paintings [with various tones of black]and the lessons [my mother]gave me on seeing in the dark.” That sense of wonder is joined by anxiety once her son is born. Barrera writes of the vigilance mothers have surrounding the breathing of a newborn, and the constant worries regarding their children’s wellbeing. “Since Silvestre’s birth, I’m more fearful than ever….I find threats and dangers wherever I look.”

Linea Nigra also centers Barrera’s mother and grandmother, a doula, as well as her aunt, through the telling of intergenerational stories in the context of giving birth, the cycle of life, resilience, and strength. “I had [Silvestre] for them and because of them; thanks to the unconditional love, security, and sense of community they offer, I was brave enough to have a child.”

Barrera’s musings on various works of art—including those of her own mother—are intertwined throughout the book, and she draws compelling parallels between creativity and motherhood. She refers to a friend’s poem, describing pregnancy as “the most complete body of work.” She goes on to examine the maternal image as depicted in the artwork of many different periods, with subjects ranging from Marie Antoinette to Frida Kahlo and Diane Arbus, giving commentary on the implications.

Towards the end of Linea Nigra, Barrera considers the book’s namesake: “…this line exists on the bodies of almost all women before they become pregnant, but the color is very similar to their skin tone. During pregnancy, it darkens.” It’s as if the linea nigra is the literal embodiment of the permeable border existing between the before, during, and after times. The observation invokes the metaphor that runs throughout this memorable volume—that the archetype of the mother is within us even before we actually go through the process, and it is indelibly an essential part of who we are.

Kimberly Lee left the practice of law some years ago to focus on motherhood, community work, and creative pursuits. An editor at Literary Mama, she is a workshop facilitator certified by Amherst Writers & Artists, The Center for Journal Therapy, and SoulCollage®. Kimberly’s work has appeared in Fresh Ink, Words and Whispers, Toyon, Minerva Rising, LA Parent, I Am Woman: Expressions of Black Womanhood in America, and elsewhere. She lives in Southern California with her husband and three children. Connect with Kimberly at https://www.kimberlylee.me and Instagram @klcreatrix

How We Disappear by Tara Lynn Masih