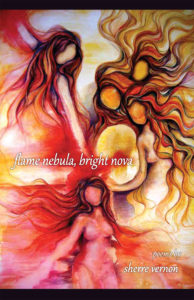 I did not know that Flame Nebula would shine so brightly until it was nearly finished. I could only tell you that I had lived much of my life under a metaphor of flame. As a child I was caught in a conflagration of emotions and tensions that ultimately separated me from any hope of intimacy with my mother. Though this estrangement hurt me, I mostly put it out of mind until I found myself on the verge of motherhood.

For my mother, who is often associated with smoke in this collection of poems, motherhood was smothering. It was too much. I was too much, a “woodbody,” burned and burning. As my body “swelled around [my daughter’s]soul” (“The World”), the questions came. Could I bring a child into this life of fire? Could I create a world in which my daughter, the new star, the fire-fish, could swim in elements beyond the nebula (family) she was born into?  As I watched my child delight in her radiant life, I ached to give her a history and a blessing, an origin story as vibrant as she:

In the beginning [she was] impossible, small, wishbrought,
my need for stars become
mathematics, become
triangles, songtangles [her]wings
are flames…I am
just the burning. The holding
(“Tell It Again: Bright Nova”)

That, then, is the work of Flame Nebula, Bright Nova: to invite my daughter into our story, and to equip her to move beyond it. The cover image, Darcy Lee Saxton’s painting “Rising,” captures this conceit well.

Whether as a result of trauma, or as an enactment of a more feminine storytelling, I found the poems in Flame Nebula refusing a strict chronology. This would be a book in which where and who matter much more than when. When taken as a whole, the poems trace my journey from childhood to and through motherhood.

The collection begins with a dream, “Augury for Spring,” in which the speaker is held on the cusp of awareness of her pregnancy. Even as she questions and fears all that threatens to engulf her, she chooses joy. The book ends with a mother and daughter caught in a state where existence twines around itself, circular and magnificent.

Between these bookending poems, Flame Nebula, Bright Nova is divided into four sections. In the first, “Flame Nebula,” I explore the life my daughter will be born into. The second, “What Is Flammable,” moves back through the agonies of my childhood. “Gravity,” the third section, interrogates what it means for me, a queer woman, only just coming into her own identity at the onset of middle age, amidst a pandemic, to step into the archetype of Mother. Finally, in “Bright Nova,” I rejoice at the child my daughter is.

In the same way that a spiral recognizes the circle, but is more, Flame Nebula sets out to both encompass and expand. This can be seen in the treatment of poetic form. The free verse poems, of which there are many, vary in length and structure. Some hug the left margin; others spread across and consume the page (“Resurrection.”). Some are held in sturdy quatrains (“In Deep”), others in mirroring couplets (“The Angel of Death”). Intertwined with these are received forms. “Like Blood From Corners” and “Bubble Mornings With My Baby” are both sestinas, a form that emphasizes repetition, a held state. “Juniper” is a love sonnet to my daughter, while “A Streetlight Lullaby” is a villanelle to my childhood. “Winter Bloom” and “Sagan” are cadralore. Between the extremes of formal and free verse, there are concrete poems (“Gravity”), prose poems (“The Ocean Is Louder”), and even one in nonce form (“Dedication of the Fire-Fish”).

Just as the real and the surreal are mirrored through the poems, there are juxtaposed reflections, bent retellings, and careful reframings of the child-to-mother journey throughout. In the paired poems “Tell It,” “What is Flammable,” and “Staying In,” I borrow Geffrey Davis’s technique of using the same title in multiple poems to show the progression of the speaker’s journey. Poems such as “The Moon,” “The Sun,” “The Last Judgement,” look for wisdom in the symbols of the Major Arcana while exploring the mundane moments of everyday life. The literal geography of the book is much like the poetic: there are roads, the desert, cities, trails braided in with dreamscapes and the vastness of space. Flame Nebula shows that the way we live is not straightforward or sequential. It is looping, spiraling, hopefully integrative.

….[w]e are not
women who turn to salt. We are
a compassion of fire: we look back, back
past a burial mound of stars, to the faces
that would shame us. Past the hands
that grasp & pull, we rise
in flame & glowing…
(“The Last Judgement”)

Flame Nebula, Bright Nova is available for presale. Presale orders include a writing workshop with the author. Register here.

Sherre Vernon (she/her/hers) is the author of two award-winning chapbooks: Green Ink Wings and The Name is Perilous. Sherre has been published in journals such as TAB and The Chestnut Review, nominated for Best of the Net, and anthologized in several collections including Fat & Queer and Best Small Fictions. Her debut poetry collection, Flame Nebula, Bright Nova, is forthcoming. To read more, visit http://www.sherrevernon.com.