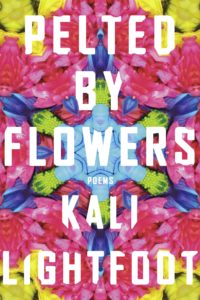 In her debut collection, Pelted by Flowers, Kali Lightfoot writes, “It took years to learn the language of myself.” She takes her readers along on her journey of discovery.

Lightfoot is a master of juxtaposition. Even the book’s sections are studies in contrasts: The early years of her life growing up in Michigan as a child surrounded by peers at summer camp and in her high school band, with her time spent alone in the wilderness as a ranger. A traveler whose poems transport us to Kyoto and Lesvos and the Outer Cape, and a resident of Salem, MA, who is at home amidst the “psychics, tarot card readers, aura photographers,/witches, and warlocks in robes and chains” (72).

The collection begins in childhood, where recognizable fears such thunderstorms and spiders, are page to page with the larger threat of hydrogen bombs and gamma rays, and with a personal unease the speaker can not name. In “Puberty, 1956”, the speaker loops an arm across her best friend’s shoulders during fireworks and says:

A gut-twisting sense of wrongness warred with my pleasure
of touching her body. I stayed away from her for all the next day,
rode my bike to the library, and for the first time, felt afraid of myself (12).

A classic late bloomer, the poet doesn’t come out until she is forty and newly sober. She is 77 before this, her first book, is published. But despite taking her time with life’s milestones and revelations, she is well aware that part of moving forward is facing challenges —  inexplicable feelings, moments of isolation, even bears who may or may not be just outside our tent. Once this next part of the journey commences, however, the world’s essential beauty is also revealed: the moose that “splashes water/flashing with rainbows” (33), alpine flowers, arrowheads, teardrop ponds. Lightfoot is a naturalist in the best sense of the word: someone who is observant of the world around her, who allows it to center her amidst the stages of her own growth.

In fact, in “Mystery”, she acknowledges the second step of recovery: believing in a power greater than oneself. Certainly, the beauty of the natural world is one of those powers, as is a god she describes as “the right-wing guy with granite/tablets in one arm and a rifle/in the other” who has kept her “sober all these years”, though she’d hoped, instead, for “Helen Mirren looking lovely” (54-55). With sobriety comes celebration: the adoption of a grandson, the discovery of Alicia Keys, the not-guilty-at-all-pleasure of reading a lesbian romance novel on a train. The cover of this book reflects that joy — an explosion of flowers much like the ones tossed at the first gay couple to marry in the state of Maine, a historic moment she made sure to witness.

In the later sections, Lightfoot’s sense of humor is evident. In “Queer Nobility,” the speaker is walking down the street when someone shouts, “FAIRY”. Instead of expressing outrage or pain, she asks, “Do I look like a gay man/in my jeans, boots, corduroy shirt?/The construction worker from the Village People, maybe?” (73).” In “Treadmill . . .with Poetry,” she, once again, artfully weaves listening to a Jorie Graham podcast with closed captions from television screens flashing everything from a Law and Order rerun to a news release from the Chicago police about a torture video. The poem concludes:

My therapist suggested walking
on treadmills at the YMCA when it’s icy:
It’s safer and you can still listen to poetry.

Finally, she chronicles the warring forces of a world full of magic that also includes melting ice caps, assassinations at the hands of the Taliban, deadly avalanches. Despite trying to reconcile a life that includes such contrasts, Lightfoot’s speaker is philosophical. Calmly, she acknowledges that all journeys, no matter their obstacles or celebrations, have their culmination. Her perspective is one of gratitude as she states in the collection’s final stanza:

I will be as dust drifting
on a solar wind,
beyond atmosphere
and planet, untroubled and unconscious.
This much-worried, much-loved life —
atoms strewn against a galaxy of galaxies.

These are poems full of startling images and hope. In some cases, you can judge a book by its cover.

Carla Panciera’s collection, Bewildered, received AWP’s 2013 Grace Paley Short Fiction Award. She has also published two collections of poetry: One of the Cimalores (Cider Press) and No Day, No Dusk, No Love (Bordighera). A second collection of short stories is forthcoming from Loom Press in 2023. The recipient of a Mass Cultural Council Grant in prose, Carla is a high school English teacher from Rowley, MA.