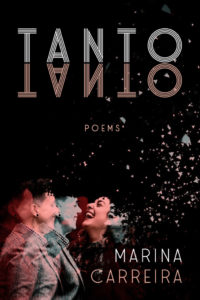 What washed over me as I read Marina Carreira’s new book of poetry, Tanto Tanto, can only be described as raw emotion.  The title means “so much, so much” in Portuguese, and it is a fitting name for the poems that follow.  In every poem, a love song is sung, not a sentimental song, but a song of grit, rejection, joy, confusion, and passion. The book is broken up into six sections and each section begins with a poem entitled “Tanto Tanto.”

Dedicated in part to “all the queer daughters of immigrants,” the book opens with “Tanto Tanto (Despite the Online Chakra Test I Took in 2018),” and we are introduced to some of the themes of this wildly immersive and necessary work.  I love the cheeky tone of the speaker, as the poem begins

of healing, I’m pretty sure that tuna sandwich you made
me for lunch today opened that bitch right up…

The line break on the heart “in need” catches the theme of the poem subtly, as the it goes on to describe an ordinary but passionate love that is new.  It is clear the speaker isn’t used to such care from a loved one and is instead used to uncertainty as the poem goes on to describe this change by declaring

fight or flight becomes not so much my mantra but
a little ditty I hum on my way to work in the morning.

Tanto Tanto invites the reader into the life of its speaker with both beautiful and blistering images of an America where you are free to live as you please but never free from judgement. The variety of forms that these poems take, from traditional stanzas to prose to a vibrant use of white space, suggest an organic nature of the content having chosen its own form of expression.  Tanto Tanto is full of richly detailed personal stories that woo the reader into caring deeply for the speaker of these poems. The emotion is so real and honest, one cannot help but relate to these never dramatic, genuine-in-every-way stories.

Tanto Tanto is an emotional rollercoaster but a necessary ride through the life of a queer first generation woman and mother. The book is full of pop culture references and Portuguese phrases as if only this mixture could tell the story right. Early in the book, “Autobiography of a Fufa” sets the tone for much to follow.

The last time I kissed a girl I was waiting for salvation in the
form of jazz and fado
It was hot hard raining and I learned tanto tanto from the
museum of her body—
that love is an art you curate with grief and not a choice like
the Oxford comma She remains
every Whitney song from The Bodyguard We married in
secret and everything is
except this love: aubade and war cry rolling on the shore of
for now / for here / forever.

When who you are is rejected by a society of unrecognizable strangers, one can find solace in family and community.  When your true love is rejected by the culture that housed you, by the family that made you, only a love song of poems such as these could arise.  How brightly these poems burn for all the immigrant daughters and for the rest of us, too.

Christine E. Salvatore received her MFA from The University of New Orleans. She currently teaches at Stockton University, in the MFA Program at Rosemont College, and at a public high school in South Jersey. When she’s not working, she hangs out with her dog, Lady Brett Ashley, and her boyfriend, Lee.