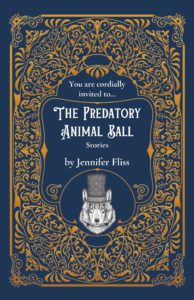 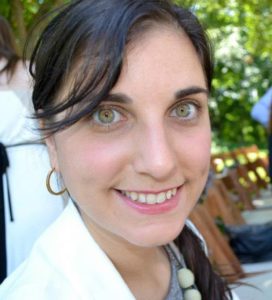 With whimsy, wit, and often uncomfortable situations, Jennifer Fliss shares an engrossing collection of domestic flash stories in The Predatory Animal Ball. With forty stories in only 176 pages, you’d assume you’ll get overwhelmed with so many changes, but Fliss keeps a throughline with subject matter and situations. Simultaneously, each story is unique enough to keep anyone’s interests piqued.

The Predatory Animal Ball is Fliss’ first book, but is not her first publication. She has a number of short stories and essays published both online and in print. Her work has appeared in the Best Small Fictions 2022 and 2019. She has a Pen Parentis Fellowship and has received many accolades for her writing.

The first story in the collection, “Pigeons,” is a painfully descriptive glimpse of animals in the city, existing in spite of the horrors people create. One would think, with the title and the first piece, that the book would be all about animals, realistic or anthropomorphic, but the following story is very much in the world of the humans, equally short and acerbic.

Stand out stories include “Sex Drive,” all at once tongue-in-cheek and blatant, quickly charting the amorous address. After recounting the happenings and non-happenings on the street, we get the commentary of “Oh! The townspeople laugh, a glint of jealousy in their eyes, you live on Sex Drive, do you?”

Departing from animals and sex, the story “Degrees” is a timeline of temperatures climbing to unlivable conditions and ending in a human-made collapse. Each paragraph-long section starts with a temperature reading, beginning with a pleasant 63 degrees. The narrator says that “it’s early spring, and the weeds are pushing up and we are all heady from the winter hibernation.” And we feel the worry at 102 degrees: “We fan ourselves with pieces of paper: takeout menus, homework, Japanese paper fans we saved from a samurai-themed party.” And when it is hotter yet, “Our short-term plans fail. Our minds fail. Our hearts fail. Our bodies fail.”

It is poignant to read such horrible situations in such short fiction because it may seem that there is no time to react. “The Child Executioner” is as dismal as it sounds, and “Yolk” gives a view of mourning a lost baby. Obvious questions abound of how to return to work after taking a maternity leave and how to return to married life full of evidence of nesting for a baby not there. This is one of the longer stories, but still flash, and in its brief span, we get both the husband and wife’s points-of-view of their loss. Here, too, we get evidence of Fliss’ excellent use of language and expansive imagination. And although mournful, the story notes the animal need to see what is lost, and to say goodbye.

Not all of the stories are bleak. “Trees Like a Way Out” is a merrier story in a way. The protagonist runs into Bob Ross at a gas station and has a little conversation with him. She tries to snap a picture, though Ross is already gone when she gets her phone out. Yes, her smart phone. Fliss is astute enough to know not to mention Ross’ dates, and to let the readers wonder.

The titular story feels like a Grimm fairy tale. Near the end of the book, Fliss returns to animals as characters and, if you are not careful, you may have forgotten some of the animal characters in earlier pieces. The story stems from the lovely first line “The Predatory Animal Ball was an exclusive affair, and a lowly field mouse would never have intentionally received an invitation.” That line in itself invites readers in by raising questions of what such a ball would entail and would the field mouse actually make an appearance.

I would guess that most of the stories in this collection are under 1,000 words but, unlike a lot of flash fiction, many of these stories are complete. There are lingering questions, as with any good story, but for the most part, the multi-paged stories are more than just slice-of-life snapshots. And the one-pagers, or sometimes, one paragraph pieces? They are delectable tidbits of fiction.

DeMisty D. Bellinger is the author of the poetry collections Rubbing Elbows and Peculiar Heritage and of the novel New to Liberty. She teaches writing in Massachusetts, where she lives with her husband and twin daughters. You can find her at demistybellinger.com.