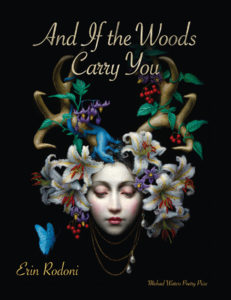 In a world like ours—unstable, inconsistent, and rife with turmoil—And If the Woods Carry You examines what it means to both be a child in and bring children into such an explosive climate.

Erin Rodoni’s collection of highly visual poems is firmly rooted in the outdoors; the book is brimming with references to forests and summer fields, to hunting and pond swimming, to insects and weather, and is replete with enough fruits and vegetables ripening on their vines to feed an audience at a Politics and Prose reading.

And yet, these poems aren’t paeans to the natural world, and they don’t advocate for living a simple, agrarian life. No, with these elements, Rodoni creates an altered reality that’s more akin to a fairytale couched in catastrophe: natural disasters, accidents, assaults, and even abductions. These poems are angry, alarming, full of dismay, and they depict a world that is dangerous and unreliable. Walden this is not.

In “Time Capsule: The Fallow Deer,” the speaker compares her father’s deer hunting to the decimation of her childhood innocence. It opens with, “Reader, they slaughtered the white deer of my childhood. / My father enchanted them into unicorns as they drifted in with the fog / that filled our valleys.” The typical, idyllic notion of unicorns is turned on its head when these are revealed to be full of ticks and burrs. And yet, even such disfigured animals are worthy of pursuit, as Rodoni writes:

They called them invasive
and shot them from helicopters. Who were they, Reader, to draw
the line of belonging? The white deer were my fireflies,
my everyday magic.

It’s unclear who’s doing the slaughtering, but readers understand that what the speaker endured in her childhood and in these stanzas is profound and transformative.

Where “Time Capsule: The Fallow Deer” deals generally (and ethereally) with the experience of childhood as a whole, “Maybe It Was Summer” relies on specific events where children are in danger. There is a girl who drowned in a creek, another whose undergarments were found after a possible assault, and a homeless veteran whom children are told to avoid, and who subsequently disappears. The speaker says “Maybe there were two girls / and a boy. I know I was always the third body, / the one not being touched. Maybe invisibility is a power, / but it felt more like a curse.” The speaker is keenly aware of how adults prey on children, and she both rejoices in and laments that she doesn’t naturally garner attention. The word “maybe” is repeated throughout the poem, the effect of which both undermines the reality of what happened and questions her own memory of these events. The whole book vibrates with an urgent energy, and I found this poem to be particularly forceful, and successful.

While the book’s first half is angsty and anxious, the second half pivots to optimism. “Parable of the Bull III. The Last Mother,” begins “But there are still days we have everything we need. Beauty, a solid acre of it. A summer that never ends.” “Parable of the Bull IV: The Last Babies Are Stars” is a happily contented take on a family’s final child—both for the baby itself and its family members. Which is quite a thing, to celebrate a last child when, just 10 pages previous, the speaker was discussing the dire necessity of self-defense classes for her young daughters.

There is so much more in these poems: a seriously ill baby, a sister who dies before having children, and meditations on the last human and last landmass—both female. And If the Woods Carry You is an intricate, sensitive take on the intersection of childhood and motherhood.

Erin Rodoni is the author of two previous poetry collections: Body, in Good Light and A Landscape for Loss. Her poems have been published in Best New Poets 2014, Blackbird, Colorado Review, EcoTheo Review, and Poetry Northwest, among others. She has been honored with awards from the Association of Writers & Writing Programs, The Montreal International Poetry Prize, and Ninth Letter. Rodoni teaches at the Writing Salon in San Francisco and serves on the board of the Marin Poetry Center. She lives in San Rafael, California, with her husband and two daughters.

Michelle Panik is a writer and elementary school substitute teacher who lives on the edge of California, in Carlsbad, with her husband and their two kids.