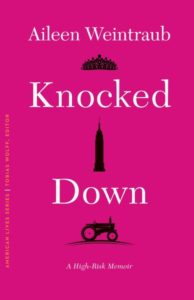 Aileen Weintraub is a writer, journalist, and editor based in New York. She is the author of three middle-grade books: WE GOT GAME! 35 Female Athletes Who Changed the World, which was A Mighty Girl’s Best Book of the Year; Never Too Young: 50 Unstoppable Kids Who Made a Difference, winner of a Parents’ Choice Award; and  Secrets of the American Museum of Natural History, a collaboration with the American Museum of Natural History. Weintraub has also had articles and essays published in The Washington Post, HuffPost, NBC, AARP, Glamour, and other publications. Knocked Down is her first memoir.

Aileen Weintraub, a nice Jewish girl from the Brooklyn, moves to the country after the death of her father. She falls in love in the grocery store with a man—a Gentile—and moves with him into a house that has been in his family for years, and incidentally, was being held up by a rotting automobile frame instead of a main support beam.

When Aileen gets pregnant, she had been working as a free-lance writer while her husband, Chris, ran a lawn equipment business they recently purchased.  Unfortunately, her pregnancy quickly moves from normal to high risk, requiring five months of bed rest.

The term incompetent cervix was bandied about; as if I didn’t have enough self-esteem issues, now my cervix was incompetent. That was like five more years of therapy right there. I’d like to lobby for a name change on this one. How about Independent Cervix That Makes Its Own Decisions About Whom And What It Will Support?

Aileen is confined to the bed, sofa bed, and outdoor lounge chair, kept company by her

Satchie Red, a shar-pei, “whose full name was Aka Satchmo Redstone Princess of All Things Purple Divine and Serendipitous Rotten Sauerbraten.”  Aileen has plenty of time to contemplate the house’s many flaws, but lacks ability to do anything about it.

The first thing I noticed from this new angle was how steeply the floor sloped. If you threw snow on the shag carpet you could call it a bunny hill and charge admission. The pine ceiling and walls made the room look like a fancy shipping container. Not quite what I was going for in the glam department.

Low on funds and in a small town without a ton of options, Aileen watches a string of hapless repair people come and go, one removing the front door before evaporating into the ether, never to seen again.

While bed rest might sound like a nice respite, Aileen battles anxiety and loneliness as their house and marriage threaten to crumble around her.

I lay there, thinking back to the winter morning I told him I was pregnant. In the short span between then and now, something unrecognizable had grown between us like a sharp and stubborn vine. I was alone. Here, with my child growing inside me and my husband sleeping next to me, I ached for a connection with at least one of them.

Knocked Down unfolds chronologically, each chapter marking the number of weeks she has successfully remained pregnant.  As much as this is inherently a pregnancy narrative, it is just as much about both the strength and  fragility of relationships.

While Aileen lost her best friend over her interfaith marriage, she finds new comfort in an older local woman, her brother, and the ever-patient Watson.  As she contemplates the ceiling and flips through TV channels, Aileen processes the loss of her father, a complicated man who loved her deeply but also suffered greatly with depression and anxiety of his own. Equally, she has to come to terms with her mother, who periodically comes to visit, being equal parts helpful and insanity-producing.

She comes from a long line of eastern Europeans who cook when there are problems they cannot solve. No matter that there is no scientific evidence to prove meatballs can cure an ailing cervix; there is always hope.

Lara Lillibridge is the author of Mama, Mama, Only Mama (Skyhorse, 2019), Girlish: Growing Up in a Lesbian Home (Skyhorse, 2018) and co-editor of the anthology, Feminine Divine: Voices of Power and Invisibility (Cynren Press, 2019). Lillibridge is the Interviews Editor at Hippocampus Magazine and a mentor with AWP’s Writer to Writer program. Her essay collection, The Truth About Unringing Phones: Essays on Yearning is forthcoming with Unsolicited Press.