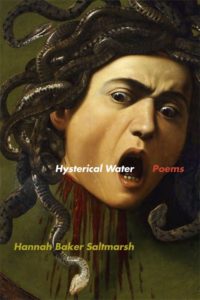 Hysterical Water is beautifully dense. Hannah Baker Saltmarsh’s writing, whether wholly her own words or found texts, demands her readers to slow down and devote time to these poems. Both intimate and expansive, these sometimes uncomfortable poems comfortably situate themselves in the ongoing conversations of feminism, motherhood, depression, and self-harm.

Divided into five sections, Hysterical Water parses the connotations of the word hysterical, digging at its Greek roots and engages with the application of hysteria and all that it implies. The opening poem in the first section, “A Lady Author’s Defense of the Female Sex, 1696,” immediately sets the tone and relentlessly releases stripped-down truisms in each couplet:

A bitch can learn as many tricks
in as little time as a dog.

A little later, Baker Saltmarsh challenges Aquinas’ claim that “woman is a failed man” with explaining that education can be had anywhere. The speaker states, “but I have in the make and temper/ of my womanly body proof that we were/ not meant for fatigue” (lines 24- 26), referencing her imagination and her propensity to learn while being a woman. Regardless of the work women do, including giving birth, they can still dream and learn.

This poem transitions cleanly into “Index of Jobs for Women,” where Baker Saltmarsh catalogs whimsical and/or realistic careers besides being Shakespeare’s sister. And not to go poem-by-poem, but it would be lax of me not to mention the short cycle “Lactivist Manifesto.” This group of poems begins with a prologue for the speaker’s children and another child, “Lenka Clayton’s baby Otto” who “tried to ingest the worst little pieces,” putting everything in their mouth.

The first poem in “Lactivist Manifesto” is a short, lyrical, essayistic look at Alicia Ostriker’s embracement of breastfeeding. The rest of the cycle covers what one would expect on the subject of lactating mothers, but these poems stand out because of the evidence from writers and thinkers before her and the variety of forms throughout. Also, it helps that Baker Saltmarsh covers the gambit: nursing in public, nursing covers, breast pumping, famous incidents of public nursing, and more.

Part two of Hysterical Water begins with “Cento on Hysteria.” Baker Saltmarsh deftly weaves poignant quotes regarding hysteria and women’s madness. The proof of a successful cento is, of course, the coherence of the poem. “Cento on Hysteria” achieves just this by collating a hodgepodge of quotes from various people and eras. This poem is evidence of the breadth of Baker Saltmarsh’s knowledge and serves as a preview of the poems yet to come which are grounded in research and synthesis.

Part three, “The Matrix Miscellany,” has a lengthy introductory note in which Baker Saltmarsh discusses her resident fellowship at the Folger Shakespeare Library in Washington D.C. and shares a kind of poetics for the work in this book. Here, she shares her experience of being shamed by others for undergoing an emergency cesarian section. Still, she finds solidarity with other “lactating moms.” Baker Saltmarsh says, “The maternal body is both a site of belonging and a site of alienation; and even the mother-nursling dyad, an emblem and source of immense belonging, can be called into question or, worse, shunned or shamed by others in a public space,” which offers the dichotomous nature presented in this volume (36).

Later, Baker Saltmarsh says that the “only way to approach” her mother’s “botched C-section” was “by merging the confessional with the archival. In the title poem of this book, “Hysterical Water,” I brought together the early modern archival research with the inherited narrative of my mother’s birth story” (37). This section of the book is one long poem, broken into seven parts and an envoi, and her time at Folger’s is manifested here.

The final poem in the book is the titular poem, another long poem in parts. Her mother’s C-section, which resulted in Baker Saltmarsh’s little brother, is painfully traumatic.  Her mother “felt the whole thing, she felt everything” (line 2, part 2, page 92). This vivid poem is interspersed with spell-like recipes for moms-to-be and postpartum moms. The entire collection is worth reading for this poem alone!

Hysterical Water is rich in imagery and ideas. There is so much in this collection that I cannot begin to address it all in the space I have here. It is smart and truly gorgeous in the rhythms and conceits. I foresee this book taught in women-centered and feminist classes and enjoyed by mothers everywhere.

DeMisty D. Bellinger Besides writing, DeMisty D. Bellinger is a poetry editor at Malarkey Books, an alumni reader at Prairie Schooner, and a professor at Fitchburg State University. She has a BA in English from University of Wisconsin-Platteville, an MFA from Southampton College, and a PhD from the University of Nebraska. She is an alum of Bread Loaf and Marge Piercy’s Intensive Writing Workshop. Also, she attended the Vermont Studio Center on a fellowship. DeMisty lives in Massachusetts with her husband and twin daughters.