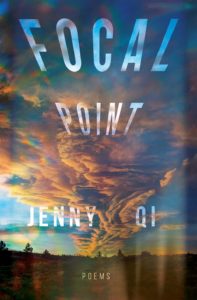 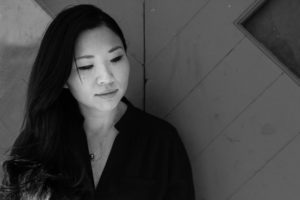 Reading Jenny Qi’s Focal Point, I thought of Orpheus, whose songs so charmed the god of the Underworld, he was permitted to lead his dead wife back to life.  True, Orpheus looked back when he shouldn’t have and lost her again.  But on a less literal level, Jenny Qi’s poems manage a similar magic, bringing her mother before us, rescuing her from oblivion.  We are each, Qi writes in her poem “Magnificent Things,” a “ghost in the making”;  but these incisive, moving poems insist on poetry’s power to make us something else besides.

Qi was only nineteen when her mother died of cancer.  Soon after, Qi began her training as a biologist:  she has a PhD in biomedical science from UCSF, where she specialized in cancer biology, and she continues to work in science.  Focal Point, winner of the 2020 Steel Toe Books poetry award, is her first book;  in a recent interview, she called it a “poetic lab notebook.”  The poems made me think about the common ground science and poetry share: their openness to the external world; their attention to detail; their acceptance of uncertainty and paradox.

Biology gives Qi an arresting set of images through which to understand loss—and connection as well. “Maybe we/could let our telomeres/shorten/together,” she suggests in a poem addressed to a lover, alluding to the protective caps at the end of chromosomes which shorten as we age.  In “Habits,” she compares grief to the muscle memory we gain from learning to play the piano. “Brain cells, like muscles, build/connections with repeated stimulation”:

Darkness, too, is a habit—ruminating

on sorrow until sorrow is easy

The way that “easier” slips in on the dash, before we can take a breath!

Even as they capture the physicality of grief, Qi’s poems make imaginative leaps into magic.  “I’ve decided to believe/in the power of ashes,” the speaker says in “Postcards from the Living” as she lights incense and drops cinders—presumably from burned postcards—through the house. “Here I am,” the postcards say. “Wish you were here.”  And in “Letters to My Mother,” the speaker writes one hundred letters to her dead mother, burns messages, folds cranes then burns them. She used to believe in nothing, she notes. “Now I believe in everything,/all the rituals of all the faiths.”

Focal Point is divided into sections with related themes weaving their way through all four—grief, love (romantic as well as familial), and the outsiderhood conferred by Qi’s identity as the daughter of Chinese immigrants.  A few experiment with form (one is a list of Craigslist posts; another uses the space on the page inventively). All invite the reader in.

This reader-friendliness is evident in “Point at which Parallel Waves Converge & from Which Diverge,” the book’s first poem, whose title defines what exactly a “focal point” is, in terms of optics.  We focus on what we care about, the poem suggests, but sometimes our gaze is pulled in conflicting directions. “Researcher, prevention won’t save my life, tweets a patient/with metastatic cancer.” The speaker, meanwhile, is staring into a microscope, then looking into the eyes of the mice her experiments sacrifice, then covering their cages so they can’t see what happens to their sister-mice. But she, unlike the mice, can see where all these lines of vision converge—in the figure of her mother, whom she sees in the mice’s “graying eyes”:

If a focal point involves light waves that converge from elsewhere, perhaps empathy for one person’s suffering connects us to the larger community. Such, at least, is the premise for some of the poems in the book’s fourth section. “Commonalities,” for example, remembers those who died in the Pulse shooting in Orlando, and “About Face” addresses racism. “How could I have forgotten not to be comfortable,” the speaker asks herself—as perhaps we should all ask ourselves, as long as anyone anywhere is shouting “go back where you came from” at anyone.

Qi’s poems never forget that we are biological beings, our telomeres wearing away daily.  But poetry has its powers, as this book makes clear.

Ruth Hoberman is a professor emerita of English at Eastern Illinois University. Since her 2015 retirement, her poems and essays have appeared in such journals as Smartish Pace, RHINO, Comstock Review, Michigan Quarterly Review, and Ploughshares.