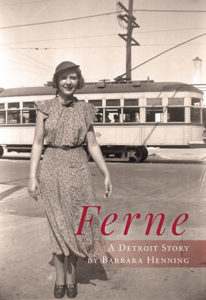 Barbara Henning’s biography of her mother, Ferne: A Detroit Story, arrived in my mailbox at the same time that I’d been listening to Smashing Pumpkins’ Adore album in earnest. One of my favorite tracks on the album is “For Martha,” which concerns the death of Billie Corgan’s mother. And while the relationships these two writers had with their mothers were drastically different, Corgan’s words nevertheless compelled me to consider the end of Ferne Hostetter’s life while still reading about her youth. And my impulse wasn’t off-base because, from the beginning, readers know that Ferne’s life will end prematurely. And so, with Ferne, Barbara Henning tells her mother’s life story in order to understand her and the time period in which she lived, as well as herself, too.

Conversational in style, the book embeds readers directly in its scenes. We are fully present to witness Ferne’s first full time job as a receptionist in the US Army Recruiting Office, and her first heartbreak when her boyfriend’s father objects to their early marriage. The ordinary, seminal milestones of a young woman’s life are keenly portrayed and, while this technique is largely successful, it is sometimes taken too far. Without proper setup or analysis, readers are left wondering why certain details are provided.

For example, in chapter six, we’re told that Ferne’s father is in poor health. The chapter then closes with: “When (Ferne) stepped down into the street, she saw that the yard and alleyway were full of cars. All her brothers and sisters were there. Immediately she knew that her father had died.” The next chapter opens with a completely unrelated potluck dinner. Without any consideration of how this death affected Ferne, readers are left wondering if it affected her at all. And since this is a book that is about a child losing a parent, this is a missed opportunity.

While Ferne is no doubt the book’s main character, her home city of Detroit plays a strong secondary role. Ferne lived from the twenties to sixties, and so the book touches on such pivotal events as the Great Depression, Roosevelt’s New Deal, World War II and its recovery, McCarthyism, and race relations in a rapidly changing city. Meticulously researched, embedded into its chapters are newspaper clippings—articles, advertisements, and wedding announcements to further flesh out the story. Since Henning wasn’t alive to witness the great majority of her mother’s life, the inclusion of these media really do enliven the story.

While most the book rolls along with the adventures of this plucky woman—it is an enjoyable story to be sure—the narration takes a tragic turn in the last third as Henning writes of a woman in ill health still managing the household of a young family. Despite being warned by doctors that having children could jeopardize her health, Ferne continues to get pregnant, steadfast in her desire to have four children.

Even when she was weak, Ferne organized projects for us—collecting cans and bottles and scraps of material and leather from various places. We would work in the kitchen with glue and …then we would hold a bazaar in our backyard and sell lemonade and crafts.

In this anecdote, we see a mother who, while exhausted from four children and medical problems, is still working tirelessly for her children, a lesson Henning seems to have taken to heart in raising her own family. This book will appeal to readers interested in both Detroit and this time period, as well as anyone who’s considered what it means to lose a parent.

Barbara Henning is a poet and novelist whose most recent books are Just Like That, a novel, and Digigram, a poetry collection. She’s also written an instructional book titled Prompt Book: Experiments for writing poetry and fiction. Henning has previously taught at Wayne State University, Naropa University, and Long Island University.

Michelle Panik is a writer and ESL teacher who lives on the edge of California, in Carlsbad, with her husband and their two kids.