This might work best with an idea you’ve already had in mind—some single, relatively simple idea that seems strange and interesting in some way. It might be something that happened to you or someone else, or a compelling anecdote someone told you.

Start to write this anecdote or idea as an active story, but instead of writing it out as it happened, take every third sentence you’re writing and flip where you were planning on going. In other words, using a kind of free association, surprise the story you thought you were going to tell at regular intervals. Finally, when you reach the end of the original anecdote—thrown into this blender—take the opening statement of the piece and think of some reversal or changed sense of its recognition as a prompt for creating the ending. That is, fashion the piece’s final statement from some reversal or recognition flipped from the opening. Try not to be obvious about any of this: let your mind both roam and hang laterally to the ideas it’s swerving away from. 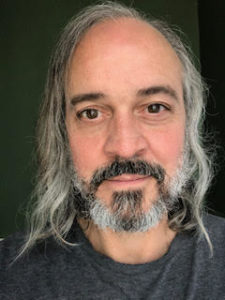 David Ryan is the author of Animals in Motion: Stories (Roundabout Press), and Malcolm Lowry’s Under the Volcano: Bookmarked (Ig Publishing). His fiction has appeared in The Threepenny Review, The Kenyon Review, The Harvard Review, Bellevue Literary Review, and elsewhere. A 2020 Artistic Excellence Fellow with the Connecticut Office of the Arts, he teaches in the writing programs of Sarah Lawrence College and New England College.
website: www.davidwryan.com
Twitter: @heydavidryan
Facebook: https://www.facebook.com/david.ryan.39948