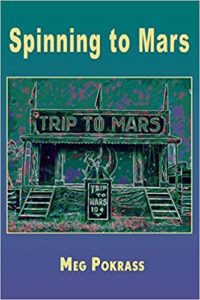 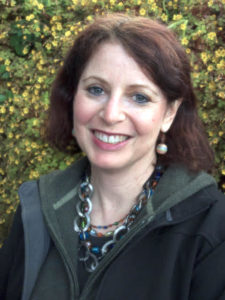 At first glance, Meg Pokrass’ latest flash fiction collection Spinning to Mars—a slim volume of approximately 70 shorts—appears to be a quick read. Yet the book, which takes readers on a journey of intimate and common themes, is best appreciated when read slowly, even aloud, as one might read a selection of poetry. Each piece, written in Pokrass’ characteristic engaging style, seems to unwrap itself on its own terms, prompting an unhurried, satisfying digestion.

Spinning to Mars follows Pokrass’ previous Alice In Wonderland Syndrome as her seventh compilation of flash fiction, comparable in acclaim with her other collections and two novellas-in-flash. Her widely anthologized work has appeared in more than one thousand literary journals, with Mars taking center stage in 2020 as the winner of the Blue Light Book Award.

Characterized by its brevity, flash fiction (defined as a complete story with a word-count under 1000) can seem challenging, its constraints, limiting. Despite this spartan-like quality, effective flash contains a distinct beginning, middle, and end, often concluding with something unexpected, upending what the writer has set up. Pokrass excels at this, as shown in pieces like “Trophies,” a succinct yet densely meaningful three-sentence story that begins with a character surveying boxes of junk and concludes with a momentous decision. Another selection, “Junkie,” walks us through the interiority of a caffeine-addicted ex-wife: [You] “shrink when anyone says hello, pull up your hoodie. You’re a middle-aged juvenile delinquent….”

Pokrass’ mastery of compression is duly showcased in this collection, with many pieces—referred to as “micros” for “micro fiction”—covering less than half of a page. This ability to distill scenes and situations to their most bare incarnations while maintaining a sense of gravitas shimmers throughout. As Olivia Clare writes in her Lit Hub article “Shorter, Faster, Better: On the Beauty of Literary Compression”:

Compression means the writer is being selective; she’s being careful about what goes in and what stays out. She is making choices. Every detail is important. Every gesture. Every spoken word. Every image. What follows, of course, is a feeling of momentum. A tempo that overtakes us. Lines and sentences motoring forward as we try to keep up. The lines/sentences go—they happen—before our eyes. Momentum gives us the feeling that the thing—the poem, the story—is happening in front of us as we read.

Through pieces such as “Wave Riders,” Pokrass illustrates her skill in discerning which words will have the greatest impact, placing readers solidly within the world of the story. She crafts impressionable images with metaphorical lines like “[g]rowing up on the warm beaches, her belly button was open to the world like an eye, watching for trouble.” Similarly, phrases from the piece “Conclusive” e.g. “a forgiving shadow appeared between them” conjure up vivid, personified representations.

The collection maintains a personal, relatable tone throughout, as Pokrass explores universal issues that include coping with loss, navigating the nuances of strained relationships, the insecurities of adolescence, and the memories that haunt us. A character discovers an odd way of communicating with her deceased mother in “Hammertoe.” The awkwardness of a middle school kiss is recounted in “Teeth.” In “Home,” she contemplates “the memories that scratched on your door, trying to get in.” And in the humorous “Custodial,” a lover cautions a character about babysitting a plant: “‘Talk to it,’ he said. ‘But never analyze it.’”

Some pieces begin with a light-hearted mood, then quickly become more weighty as characters grapple with unresolved matters. “Truce” begins with a father and daughter eating lobster at an outdoor cafe, then evolves into deeper, uncomfortable inquiries: “The question will always remain encrusted between them: Why did he leave on her fifth birthday, right as she was learning to fly?” This and other rich, emotional topics are weaved and addressed throughout Spinning to Mars, rendering it a reflective, often wistful read.

Russian writer Anton Chekhov once said he could “speak briefly on long subjects.” In this award-winning collection about love and loss, Pokrass proves—definitively—that she can do the same.

Kimberly Lee left the practice of law some years ago to focus on motherhood, community work, and creative pursuits. An editor and contributor at Literary Mama, she is an Amherst Writers & Artists and SoulCollage® facilitator. Kimberly’s work has appeared in Fresh Ink, Words and Whispers, Toyon, Minerva Rising, LA Parent, I Am Woman: Expressions of Black Womanhood in America, and elsewhere. She lives in Southern California with her husband and three children. Connect with Kimberly at https://www.kimberlylee.me

Under My Bed and Other Essays by Jody Keisner

Since the House is Burning, by Suzanne Edison