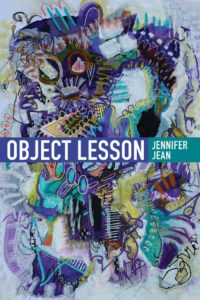 Jennifer Jean’s new book of poetry, Object Lesson, is not an easy read.  The topic that weaves her poems together is the objectification and pain experienced by women who are mired in, or have escaped from, what is euphemistically called “sex work.”  Jasmine Grace Marino, founder and director of Bags of Hope Ministries, who was a sex worker for eight years and who has been out of that life for the past thirteen years, writes an introduction. She says about the film “Pretty Woman,” in which Julia Roberts stars as a prostitute, “…not once did Richard Gere show up in a Lamborghini and put a string of pearls around on my neck. On the contrary, I was emotionally, mentally, and spiritually dead for those years, and for many years to come” (1).

Marino’s introduction is a much-needed entry point into Jean’s poems, poems based on interviews with women and girls who tell their stories of humiliation and rage. This collection of twenty poems was originally part of a full-length manuscript, which Jean pared down in an effort not to overwhelm the reader. Interspersed throughout are small nuggets of a larger poem that echoes lines of the hymn “Amazing Grace,” a breathing spot for readers. For example: “I am so over this /  ancient itch! How sweet the reach//   when I’ve been a retch / if you called me a sound. O! / Amazing grace!/”

This collection moves between persona poems in the voice of sex workers to reflections of Jean’s work both interviewing them and teaching them in poetry workshops to poems that raise connections, at times a bit obtuse, between current sex trafficking and what Jean calls “historical slavery” as evidenced by a poem about Harriet Tubman. For such a short collection, the shift in point of view and focus occasionally feels jarring.

Jean’s discomfort with interviewing these women in public places appears in “Exchange:” They’re building these casinos/   so close to homes. Pimps make you/ work /those hotels forever.// Everyone in Starbucks  /can hear /our exchange// over the blender & bustle. So,/  I turn off /the recorder. Stop interviewing//  (11).

Jean doesn’t shy from the sordid details of these women’s lives.  “Bend over, says a man /the first time, I want to see/ what I’m working with… “

The poems draw the reader into a world of misery without offering solutions. These women are objects, as in the poem “Object:

There are a few moments of levity, as when a woman tells her daughter she needs to tell her something. The daughter collapses in tears, thinking her mother has cancer. Actually, she wants her daughter to hear from her lips that she’s an “escort.”

One of the most affecting poems is “Dear Jasz,” a letter written by a woman to her younger self, a warning about the trouble that awaits her. Jean doesn’t mince words, as indeed, the women she spoke with did not: ”When you’re just a little chick at the bar/  & this regular dude from Roxbury jerks a jeweled hand out his pocket / to flash his thick wad— //don’t think you can play him./He knows you.  //& later, when you’re down your first day hooking, /down fourteen hours in a windowless “salon” in CT, /when you’re in his jag to Cambridge, /holding a new, limp wad in your hand— //see how small it is.//Remember—this isn’t your money”  (19).

The collection only occasionally steps away from the actual stories to meditate on issues of hope and healing.  In “Thistle,” for example, based on the name of a safe house for sex traffic victims, Jean evokes a much-needed image of the thistle’s power in healing and peace: “Heart—centerpiece of sustenance/& no weed. O, taste of celery. Herb of witch.//In War & Peace, she is /the finale field. The constant, gorgeous //soul of us. The eyes of us, the Thriving” (42).

The final poem in the collection, “Safe Home,” (45) presents vignettes of women identified by initials C to Z, who have found safety,  home and hope. It’s a fitting acknowledgement of the rewards of finding another kind of life.

Christine Beck has an MFA in Creative Writing from Southern CT State U and teaches as an adjunct. Poetry is her primary genre and has contributed to incorporating poetry into her creative nonfiction. She was the town Poet Laureate of West Hartford CT for two years and she created Poets on Poetry, a lecture series on poets sponsored by the CT Poetry Society, of which she was President for ten years.  Christine Beck’s poetry manuscripts include Blinding Light, Grayson Books, 2012 and two chapbooks: I’m Dating Myself, Dancing Girl Press, and Stirred Not Shaken, Four Oaks Press. Most recently, she has had poems published in the CT Literary Anthology, 2021, and the Connecticut River Review, 2021.Her creative nonfiction has appeared in “Dreamers,” and “Far Villages,” Black Lawrence Press. Her website is http://ChristineBeck.net.