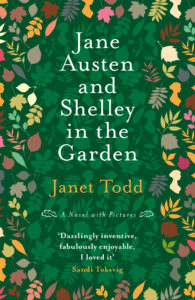 Why should a discussion of W.G. Sebald (think Austerlitz, 2001) arise between two British women seated in a Norfolk pub of an early afternoon? But the women, Fran and Annie, old friends, are interested in literature and this banter is typical of their literary exchanges. A third character, Rachel, enters on page 11. She’s a wealthy American who teaches the art of creative writing and makes “good money,” thinks Annie, who “judges from her clothes—unaware her new pal benefits from an ample family trust fund.” Then young Tamsin appears and soon Thomas, a passionate Shelley follower. Tamsin is a sparkling, and very modern, literary enthusiast with a lot of varied “loves.”

Meeting Jane Austen in the loo, Fran speaks to her: You see, a writer must be absent to be authentic. You knew that. Thus begins the ongoing badinage between Fran and her literary ghost who trails her throughout Todd’s brilliant novel.

The story concerns itself mainly with the fond relationship between Fran and Annie. They bear with one another in varying degrees of irritation, always assuaged by their enjoyment of each other. We overhear numerous discussions between them. Annie is still lecturing at Cambridge and Fran, having taught, written, and raised her son Johnnie (with lots of help from Annie), now resides alone in her rather dilapidated cottage in Norfolk.

Fran has begun writing about ­­­Agafia. Will this be a Chekhovian treatise on the disobedience of men and women in their relations with their spouses? (Since the novel gives few details of Agafia’s actual life, this reviewer recommends readers research the stalwart luminary, who still lives alone in a remote Khakassian mountaintop.) Becoming acquainted with Agafia allows you to travel through the novel with greater understanding of Fran, Janet Todd’s chief character.

A writer of rich literary acumen, Todd offers so much to the reader, with perhaps more literary associations than the reader can handle. She is a renowned scholar, having taught in Cambridge, in Glasgow, in Rutgers, NJ, and other sites across the world. She has written on Austen, the Shelley Circle, Wollstonecraft, John Clare, and others. Her academic enthusiasms spill over into this, her unusual and fabulous fourth novel.

Her characters are ripe with their own literary assumptions. Annie, for example, regards Sebald as an author lacking plot, and feels similarly about Austen’s Emma. But along comes Tamsin, a bright, young, and eager writer who knows herself as very modern. Her impressions and her nature appear like quicksilver and are thought-provoking for the older women who admire her.

Thomas, the Shelley enthusiast, wants to pursue his 19th C. Romantic poet, perhaps to visit Shelley’s early-life domicile in Wales, perhaps to follow the poet’s treacherous travels in Italy. Initially, we think we see Thomas courting Rachel, but other developments occur. Thomas is a kind of literary scrim for the two older women, Fran and Annie.

Austen offers a comment (on p.18): I had no command of the carriage… [speaking of the confinement and safety of the vehicle in which women travelled, in her day.]It was not yet the Age of Woman. You can’t anticipate history, though you can rewrite it, as your age is doing. Fran is rebuked. She acknowledges the humiliating lack of control one has over one’s life at any time (especially for females, is the implication). Does one have a duty to be mutinous? she asks.

Early on Fran shares that the “presence” of Jane Austen in her life “makes the world a little less cold than it might otherwise be.” As readers, we tend to agree.

Where will an author and educator of Janet Todd’s stature carry her story? Some, not prepared to delve into her numerous literary allusions, may feel discouraged. I, however, am enthralled throughout and revel in the presence of Austen and the comic exchanges that occur between her and Fran, even as the literary group travels on to Venice.

Latish summer and Fran comes again to stay with Annie to finalize the Venice trip. The train rolls over the low wet land beyond Ely, boats below road banks and lonely blank house across open fields. She’s considering Odysseus, the cunning storyteller, striding out of the known into so many new worlds and words. I too, she thinks, am going into new worlds. Do I have enough material to entertain the natives?

Supremely secure in her craft, Todd offers much more than erudition. Writing with clarity, she sometimes soars into beautiful turns of phrases, offers well-constructed sentences that often serve as metaphors, and exhibits her ever-ready sense of humor. In the Guggenheim Museum in Venice:

Annie and Tamsin are keenest to respond, chat and judge, noting the likeable, the meretricious, the autobiographical. With a penchant for Rosa Bonheur’s cows and Victorian genre paintings of workhouse paupers, Fran has so little sense of modern art that the abstractions, the clever plays of light and shade, of dark and texture, of white and white, leave her cold and inarticulate. She likes only Magritte’s night-time house under a daytime sky: full of insomniacs.

The illustrations offered in color throughout the book enhance the reading. In my view, they lighten the book and further the reader’s focus. For me, they elucidated parts of Wales I could not picture, particularly those on pages 92, 117, and 122.

As the women discuss moving in together, is Fran aware of her akrasia or oblivious to it, we wonder. On p. 270, she muses: Time shuffles off every mood and perception. Nothing is finally learnt or defined, certainly not the self.

But no matter. Wherever you are, fix a cup of strong English tea and settle in with Todd. Imagine the church bells of England ringing as you contemplate your personal path toward aging and proceed to investigate your prior connections with Jane and Percy. I, for one, plan to read Richard Holmes’ biography, for starts. If I survive the biographer’s 830 pages, I may re-read Emma. Whatever, let Janet Todd’s remarkable Jane Austen and Shelley in the Garden set you off on an exciting new literary venture.