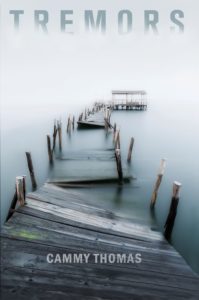 While the organization of Cammy Thomas’s latest poetry collection, Tremors, is simple—three parts that address each stage of the poet’s life—the material is not. Tucked within these pages are poems both humorous and sober, declarative and unsure, with the unifying theme being tremors—both physical and figurative.

Part I concerns Thomas’s childhood growing up on rural Long Island. Here, the tremors are of strength, and a vulnerable child often finds herself at the mercy of unreliable caretakers. “Mum”—which is a reference to both moms and secrecy—tells of hiding from a father often armed with a whip or gun. It begins:

out in the world
our smiles look perfect
inside the house
dread keeps us mum (3).

These short, declarative lines, combined with the repetition of phrases like “dread keeps us mum” create a systematic, predictable tone that starkly contrasts this unstable situation. Noticeably absent from this poem is the mother, or any adult who can protect the speaker.

Part I closes with “’The Blues in My Heart, the Rhythm in My Soul,’” which is about a housekeeper named Sally. As the one responsible for so much—from cooking to picking the children up from school—Sally is the home’s most capable adult. And yet, even Sally cannot be fully depended on. Because when the family dog suffers a seizure, Sally runs away. She does take the narrator with her, but doesn’t give aid to the dog. And so, Part I closes with the idea that all caretakers, even capable ones, are fallible.

Because this book review is for a journal devoted to mothering, I assumed the middle section’s poems would delve into tremors of confidence as a mother. While mothering is present, it isn’t a primary focus. It first appears in “The Box,” which tells of the speaker’s premature baby spending her first days in a hospital. Thomas writes frankly of the situation, saying:

I could stand pediatric
intensive care for an hour at most.
One confident mother
held her tiny son,
stayed all day to bathe
his inch-long feet
after the docs
pricked his heels for blood.
He was too small to scream (35).

The prose, devoid of affect, is as sterile as a hospital room. The next two stanzas tell of another premature baby, who ultimately doesn’t survive, before returning to the speaker’s situation:

We decided to name her
Claire. When we bent
to the hole in the box,
and softly called her name,
her breathing faltered (36).

The first stanza describes the baby physically; in this final one, Thomas and her husband are literally outsiders to their fragile baby’s life. Writing about everyone but herself speaks to Thomas’s paralyzing shock.

With the next poem, “This Moving Ship Our Life,” the childrearing years are bypassed, and Thomas tells of a child—the same child who was terribly weak just two pages ago—now grown and moving out of the family house. I lamented the omission of mothering young children, but perhaps this topic was already addressed in one of Thomas’s previous books.

For me, the most interesting material lay in Part III. Here, the writer turns to her aging body, her failing memory, the downsizing of her home. The tremors are physiological, of both the body and mind.

In “Watch Out for the Old Cows,” the speaker unapologetically likens her dogged self to a farm animal:

Watch out for the old cows—
don’t interrupt me when I’m eating,
don’t tell me how to do things
I’ve done for decades, like
drive or think or cook a stew (67).

Covid-19 also figures prominently in this section, including “Riddles,” which is a poem-in-questions. It contains four stanzas, with the questions in each stanza becoming progressively harder to answer.

What blocks breathing to protect breath?
What might leave a three-day residue on a table?
When do uncounted debts become unpayable?
When am I close enough to death? (80).

This collection is humble, hesitant, probing. In a world of perfect lives on social media, such honest vulnerability is refreshing.

Michelle Panik is a writer and ESL teacher who lives on the edge of California, in Carlsbad, with her husband and two kids.