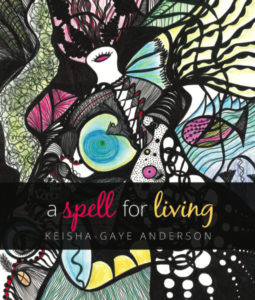 A Spell for Living is a visually striking collection of poetry from poet Keisha-Gaye Anderson. In her third collection, Anderson pairs her poems with original pen and ink drawings, adding movement and intimacy to the page. The conversational tone and the drawings create a document not unlike a personal journal where the writer has invited us to see her mind at work. But these are spells, too, or poems meant to foment magic for a people.

Keisha-Gaye Anderson’s biography is full of interesting and varied detours. She is a poet, visual artist, and businesswoman originally from Jamaica and is now based in New York. Her work has appeared in many journals and anthologies, and she is an alumna of VONA Voices, Callaloo, fellow of the North Country Institute for Writers of Color, and a former resident of Brooklyn Public Library Artist in Residence program. She received her MFA in creative writing from The City College, CUNY.

A Spell for Living is in print, but has multimedia elements, too. You can find some audio tracks for some selections on her website (https://www.keishagaye.ink/poet-author). However, the book works well enough on its own. The collection opens with, aptly, “Invocation,” which calls the audience in with a simple but emphatic, “Hey!” It continues by recognizing the auditors’ past glories—from music composition to escaping enslavement. The poem ends with, “You are the answer / to your own question / Now, get to work,” which, essentially, is a call to action. What follows are strategic or informative but beautiful poems and artwork.

Anderson’s short lines give almost a percussive rhythm to her poetry. For instance, in the poem “Stay Awake,” none of the lines are longer than four words, much like her other poetry. “Poor dear,” the poem begins, then

As many of the poems in A Spell for Living, “Stay Awake” ends with a call to action:

She does not reduce the idea of education to a trendy word, but states why it is important to remain aware.

Beyond staccato lines and calls to action, Anderson’s conversational and almost familial tone plays throughout the collection. In “Spin,” a commentary on the twenty-four-hour news cycle, she uses second person and exoteric language to mirror conversation. There is a shared history between speaker and auditor. “You know,” the speaker says, “I bet we could even / remember how to fly,” including herself in the work. At the end of this poem, she switches to first person plural, with “we are trick candles,” and later “We’ve just got to / Stop.” This familiar tone does not leave the poem without beauty, though. Anderson teases the senses here and in other poems with rich imagery and her driving rhythm.

A Spell for Living speaks directly so some of the issues affecting Black communities today (I use communities to denote the diversity within the Black communities, just as Anderson does in this collection). Her Jamaican roots come through in “We Talawah,” where she shows the power of a people through love and unity. “Black Is Not Enough” is a poem where she addresses the diversity of people with ebon skin: “Can you name / all the shapes / of your intelligence” she asks early on in this poem, which seems to speak to the varied voices in Black community. And later, in that poem, Anderson says that

The titular poem works like a spell more than any other. “A Spell for Living” is a magical recipe for a dream life. Every line is a command towards freedom, an uninhibited lifestyle. This poem is exhilarating and bold in its blazoned directions. For example, “Crumple up your / birth certificate / toss it in the trash” and “storm the church / and use the holy water / to douse your head / kick over the lectern” or “fuck respectability / become a thief.” But none of these ingredients of this spell are arbitrary; they all lead to a powerful end.

Keisha-Gaye Anderson’s A Spell for Living is a unique experience of a book. Her commentary offers joy and celebration as well as thoughtful reflection on historical and contemporary concerns. Truly, an enjoyable read.

Besides writing, DeMisty D. Bellinger is a poetry editor at Malarkey Books, an alumni reader at Prairie Schooner, and a professor at Fitchburg State University. She has a BA in English from University of Wisconsin-Platteville, an MFA from Southampton College, and a PhD from the University of Nebraska. She is an alum of Bread Loaf and Marge Piercy’s Intensive Writing Workshop. Also, she attended the Vermont Studio Center on a fellowship. DeMisty lives in Massachusetts with her husband and twin daughters.