Poem with the Yellow Pages and Rotary Phone

Only the woman’s hands and last year’s phone book,
resting on a wooden surface scarred and stained
by past projects, are visible in the video,
distance foreshortened as though I am seated
close enough across her to hear her whisper
my fortune. She folds, then turns each page
the way one might leaf through old albums.
Time, too, is foreshortened, hours of folding and turning

compressed into minutes, and now the book
is the type of tree I remember seeing on a side table
when I’d visit you in the Sabena Airlines office
on the second floor of the Manila Hilton,
the Yellow Pages folded like napkins
arranged into a cone. Dressed in an orange
and brown dress, you’d sit at your desk
studying reports, conversing with colleagues,
talking to agents over the phone, while I drew
stick-figure robots on scratch paper to pass the time.

I was eight or nine. These were the same figures
I drew in school, on the back of mimeographed tests
after I had answered all the questions. One time,
I got called to the principal’s office
because the test had a picture of a window
with the words pane and pain underneath,
and I argued with my seatmate
because I thought pain was the right answer.

At home I’d sit by the black rotary phone
at the bottom of the stairs, longing to hear your voice
at the other end of the line. I’d pick up the handset
and dial the work number I knew by heart,
my forefinger arcing right and left,
rubbing the surface beneath the wheel
as if to wipe away dust that concealed
a name carved into marble. Sometimes,
instead of a shrill ring, I’d hear the busy signal
like a bird squawking in pain,
and spin the finger wheel
until my luck changed.

Now as I try to replicate the craft, turning this soon-to-be-
obsolete phone book into a tree like that
from which it came, my finger goes over numbers
of Auto Repairmen, Cleaners, and Security
as it flattens each folded edge,
instinctively, the way a mother
might fold her child’s blanket and clothes. 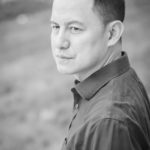 Born and raised in the Philippines, José Edmundo Ocampo Reyes is the author of the chapbook Present Values (Backbone Press, 2018), winner of the Jean Pedrick Chapbook Award from the New England Poetry Club. His poems have appeared most recently in Rattle: Poets Respond, Scoundrel Time, Solstice, and Memorious.