One of my early memories is marveling over a statue of Mary, the Mother of Jesus in the corner of my first-grade classroom. The nuns said Mary was the perfect Mother.

I learned more about Mary that year and soon had begged my mother for a statue of her to keep in my room—I talked to her when I was upset. This serene woman who was, as I had been told, the mother of us all, was very different from my dear but loud and often annoying real-life mother. My mother rarely had time for me, but Mary was always there. My mother was tired after work, she said, and when she did talk to me it was to remind me that I would be pretty— “if.”

If I would only keep my hair in order, stop laying on the floor to read and wrinkling my clothes, get my nose out of a book and play outside: if, if if. It seemed that what I did was never quite enough. Mary, however, her statue beaming hope, was a refuge. I hoped the real person was as serene as her statue and that she was listening. Maybe, if I were persistent in my requests, she would whisper her secrets of how to remain calm and loving at all times to my Mom.

My grandmother was another refuge, but I learned that I could only go so far with her because my mother was her daughter and in truth my mother was an excellent daughter even if she only rated as average for a mom. Grandma told stories, let me watch her while she cooked, took me shopping, watched TV with me and always seemed to have time to hear my little plays and poems.

When it came time for birthdays, my mother abdicated all but the general planning to her sister. My Aunt would make a fabulous cake, shaped like a baby doll or some other decorated thing. She hand-painted invitations and menus for the party. My mom bought colored bread at the Giant Eagle and made cream cheese and jelly sandwiches to serve with the cake and together with Aunt filled cups with candies and wrapped favors for my guests to take home with them.

I had two other aunts, one who let me go to her house after school so I could try out Girl Scouts, Brownie level. Another, who had color TV, was the mother of my beautiful younger cousin and never seemed to have anything negative to say about anyone.

When I would come home with glowing, loving reports of what these Aunts, what my Grandmother had said or done, my mother was happy, never jealous.

It was not until I was older and a mother myself that I realized the value of the gift my mom had given me—one was the realization that I did not have to be perfect to be a good mom—for she was a good mom in many ways. I always had what I needed and even in the times of carping on my appearance, I knew that she loved me, although often with a sigh. But this person who was always too tired, did not like to play, did not enjoy children’s parties, did not want to take me to a Scout meeting and never provided more than thirty seconds of attention and a rote “that’s nice” for something that I did, had encouraged me to shower these other figures, Grandmother and Aunts, with love so that they could give me what she could not.

But her real genius was that she had assembled a cohort of women around me, mother figures, who filled in, who were in fact repositories of all of the traits she lacked.

My grandmother, the patient listener and playmate. My artistic aunt. The kind loving aunts who let me go to her house and who modeled patience with her own children. And the school itself—the nuns who taught me about the all-loving Mary—they poured into my little soul the knowledge of a Higher Being, of a saving Lord and the wonderful role He had for women, for at my school I was encouraged to think. To create, to question, to learn and learn and learn.

Sometimes she would ask me, late at night when we sat on the porch waiting for my dearest Dad to come home from work, if I every wished that someone else was my mother. I always said no—after all, she was my Mom. Who else could be? So, thank you, Mom for instinctively knowing yourself well enough to find others, a cohort of mother figures who, together with you, would provide me all the various styles of mothering I needed but that were beyond your ability as a person. I only hope I have recognized my own flaws and filled in as well for my children. 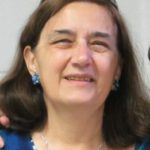 Joan Leotta plays with words on page and stage. Both her written and performance work often deal with food, family, and strong women. Her chapbook, Languid Lusciousness with Lemon is out from Finishing Line Press. Her poems, essays, and articles have been published or are forthcoming in Visual Verse, Yellow Mama, Pure Slush, Verse Virtual, Writing in a Woman’s Voice, Pine Song, The Ekphrastic Review, Potato Soup, Eastern Iowa Review, Mystery Tribune, overmydeadbody.com, and others.