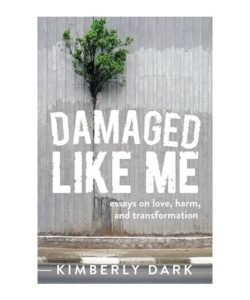 Damaged Like Me: Essays on love, harm, and transformation by Kimberly Dark

“What would happen if one woman told the truth about her life? / The world would split open.” –Muriel Rukeyser

The last book that split my world open was Christina Crawford’s 1978 book Mommie Dearest. ‘How could she say such horrible things about her mother?” was the initial overwhelming response to the book. People didn’t believe her story, but I did. I believed every word. At the time the term ‘child abuse’ did not exist. It took one woman telling the truth about her life to change things.

The world split open again recently when I read Damaged Like Me by Kimberly Dark. Dark is “an incest survivor, a fat queer woman, and an active cultural creator” and a sociologist “trained to investigate social patterns” (4). And yet, as she says, “people like me…have been dismissed as biased about the exact topics on which we are expert” (5). “The assumption that those who are ‘damaged’ are of no use is a nefarious silencer” (5).

We have seen this silencing time and again in our courts, and most recently in hearings for our supreme court nominations. We are seeing it daily in social interactions. Dark chooses to address these issues within storytelling and performance, and more specifically from her own story, her own body. “I’ve learned about the significance of embodied storytelling. My embodiments are varied of course—I speak from a fat body, a queer body, a female body, a mixed-race-white-privileged body, et cetera.” (125)

Dark maintains that people who have been damaged or traumatized can see social patterns better than others, because they’ve had to—they’ve had to learn to traverse a world that could hurt them. Hypervigilance is a powerful skill. Damaged Like Me is catalogued as women’s studies, sociology, and memoir precisely because the book is a braid of these three subjects: historical women’s truth, sociological overviews, and personal stories. What split the world open for me is her ability to look at an event from the 300 feet above, from front and back, and from within her own body, all at the same time. She is at once personal and sociological “I am keenly aware that one might say to a thin girl ‘Pull down your shirt; it’s riding up.’ Whereas one would say to a fat girl: ‘Pull down your shirt: your belly is showing’ “(41). “My body is vulnerable to social interpretations, and in being vulnerable I draw subtle attention to everyone’s vulnerability. All bodies experience social critique—and some are more vulnerable to sanction or actual injury than others” (129).

When was the last time I looked at a young girl dressed in a skimpy outfit and feared for her? Yesterday, actually. Why? Because society has deemed her body vulnerable. Dark asks “Can the vulnerable body be powerful?” (129) Dark’s power is in her fearless writing and her ability to move between the personal and the public, the intimate and the academic. She writes seamlessly of her own trauma and damage as well as the tension and contradictions our culture has imposed. She teaches yoga in a fat body. She takes in the ‘crazy’ we encounter every day and laughs at it (does a man really think cat-calling will turn a woman on? Etc.) without dismissing the real danger in it.

In the last essay in the book “Damaged, Like My Son,” Dark says “Parenting changed me forever. Of course it did…It changed me because of the time and effort involved and also because I kept having to put myself and my values in his position” (230).  “There’s no escaping the fear or inadequacy and no way to prepare enough for the task. We did the basic things in delivering him to adulthood without family members hitting him or having sex with him. I yelled more often than I like and sometimes I was emotionally absent, depressed, or anxious. I always came back, though, as soon as I could” (231).

This book provides a roadmap to ‘come back’—providing directions for finding our damaged locations, for seeing them as places for regrowth, and for navigating the world in a body emboldened by love.

Celia Jeffries is a writer, editor, and teacher whose work has appeared in numerous newspapers and literary magazines, and has taken her from North America to Africa, and many places in between. Blue Desert, her first novel, was published this year.