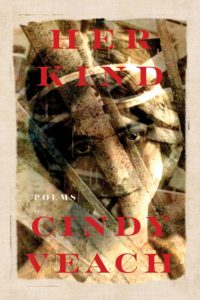 Cindy Veach earned her MFA from the University of Oregon where she was an assistant poetry editor for Northwest Review. Veach is the author of two poetry collections, including Her Kind, and Gloved Against Blood. She has also published a chapbook, Innocents and is the coauthor of the script, Imprisoned! 1692. Her poems have appeared widely, in publications such as the Academy of American Poets Poem-a-Day, AGNI and Prairie Schooner. Veach’s poem, “This Patch Where the Light Cannot Reach,” was selected for the Philip Booth Poetry Prize and her sonnet crown, “Witch Kitsch,” won for the Samuel Washington Allen Prize.​ Veach is currently a co-poetry editor here at MER.

Her Kind opens with a poem entitled, “I, Witch,” and its last poem, “I, Hecate” folds over that first one as ouroboros, onto this declaration:

In the pages between these two poems, Her Kind enacts the triplicate of witch identity, but on a cosmic scale: historical witches, everyday (b/w)itches, and witches of myth.

To give light to the historical witches, hanged and otherwise erased, Veach offers persona poems, speaking through the voices of these women as she imagines them, and as they were preserved in historical records. These poems are gutting in their clarity: in some times and places, there are no things a woman can do if the patriarchy declares her a threat. Her innocence, her actions, her existence are all malleable.

We want to believe that the times for hunting witches are past, that as women living in a democratic nation, we are safer than our foremothers. Her Kind brings this assumption into question by offering us the paradox of middle-aged womanhood: there are no witches here; we are all (b/w)itches. To make her argument plain, Veach gives us a woman bound in an abusive marriage and finally breaking free, and crystalized moments of the #MeToo movement. These contemporary confessional poems tell us that while murder may be off the table, a woman who acts in her own interest is already (socially) condemned, “My name is fault and blame and home-wrecker and bitch and witch” (10).

The third face of witchery offered in Her Kind is of mythic scale. Veach’s speaker puts on the power of Hecate and her sisters across cultures: Kikimora, Circe, Chedipe. In reading these poems, we are finally able to step out of the identities put on us,  “You are a woman. You are middle aged” (20), and instead reclaim the true nature of the divine feminine—potent, unafraid and everlasting.

Sherre Vernon (she/her/hers) is the author of two award-winning chapbooks: Green Ink Wings (fiction) and The Name is Perilous (poetry). Her work has nominated for Best of the Net and anthologized in several collections, including Bending Genres, Fat & Queer and Best Small Fictions. In 2019, Sherre was a Parent-Writer Fellow at MVICW. Readers describe her work as heartbreaking, richly layered, lyrical and intelligent. To read more of her work visit www.sherrevernon.com/publications and tag her into conversation @sherrevernon.