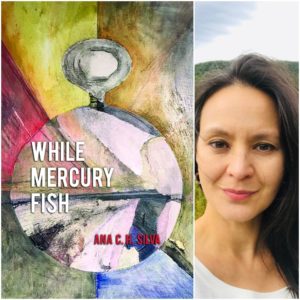 Ana C. H. Silva’s While Mercury Fish is a cautionary tale women whisper to each other and sometimes to men, but the men don’t listen.   The poems, like whispers, can be mistaken as rumor or disguised, as it’s less respectful twin, gossip. But every ounce of a whisper holds a gram of truth. The truth is women’s lives are vulnerable.

These poems and prose read like a woman with her eye on the horizon, right up to the moment she has to escape.

In the opening piece “The Best Way I Can Explain It,” the reader is pulled in by a waterfall of moving images that entertain and hypnotize, as television had the power to do for early watchers. The writer uses television as a metaphor for magic.  Magic is memorizing until it is not.

But the woman will one day be unable to carry on the act, will tear off the sequins that scratch her skin, enlist the help of a stained-card, cut-rate divorce lawyer, set up shop as a hairdresser in the next town. (1)

Silva is an American poet and visual artist with roots of Taiwan and Portugal.   Her work includes a previous chapbook One Cupped Hand Above the Other and an exhibition Lines in the Woods.

This collection reads like a time line of how-she-got-here.

The pieces entitled “1980s” and “1990s” are written as if the writers’ prompt were, “What we grab if we had to go”. They are filled with humor. They glisten with snarky attitude. Who of a certain generation hasn’t felt that all you really need is eye concealer, black Calvin Klein Jeans and philosophy books?

The mood shifts as the speaker moves from care-free-party-girl to mother in the poem “2020s.”

Trying not to squeeze
their little fingers
too hard. (6)

During Hurricane Sandy, Glenda Moore, a Staten Island mother of sons ages 2 and 4, sought help knocked on several doors and received none. Her children were swept away. I hadn’t thought about her or the circumstances of a Black mother living in a town 64% white, where no one responded to her pleas in a long time. This poem took me on a ride I didn’t want to go on. But I had already handed in my ticket and the train was pulling out of the station.

The freight train of 2020 and its caboose, 2021 and won’t be stopping anytime soon.  The pandemic, phone-filmed police violence, rightly-so-enraged-humans, darkening democracies, fires and floods may be the end times or just, our times.

This is not a book that seeks to help a reader escape a world literally on fire, but a meditation on women’s work. Like all dystopian tales, it has moments where the narrator has flashbacks of the good old days, when we had so much and were too busy to be grateful as in the lines:

There are no saviors. I always knew that, but we had working light switches, soft, dry beds, internet, Netflix. (9)

Published in 2020, a year when climate change was at the forefront of everything, these poems give voice to both panic and persistence.

“A Poem about Storks” reminds us that our children are not property.

—-Either way they are not
Within your grasp— (8)

The quaint notion of baby arrivals by stork is a dreamy image, but the poet snatches the reader back into reality with a reminder of a very modern idea of children as separate entities.  Human are beings that we bring into the world and send out, their fate of captain or can collector, unknown.

The collecting of aluminum cans is a street scene that plays out in New York or other cities where recycling is done. It’s not unusual to see a person, often elderly, often a woman going though waste baskets at the corner or burrowing through bags before the sanitation crews come through.

The poem “Aluminum” illuminates another way in which we humans are connected to each other, and frankly can’t get away from each other.

It’s not hard to think some of this liquid is backwash
From inside their mouths. Those people who voted them in.

Their spit run all over our hands, wets
Our forearms    pant legs   sandaled feet.

We keep shaking out, stashing the sun-bleached cans
In thin, ragged plastic bags. (11)

Sit with this poem for a moment. Do the words “backwash” and “spit” fill you with anger, disgust or a sense of violation?

The line “From inside their mouths. Those people who voted them in.” makes me burn with repulsion.  The poet uses the metaphor of the can collector as one who must go on, clad in the dregs of our fellow humans.  The work must go on if we are to survive even if by nothing more than carrying our lives “In thin, ragged plastic bags”.

Silva ends the collection with a narrative tale “The Red Button,” where all our rescue fantasies play out in the sound of our breathing to the stench of our sweat.

New Yorkers trapped in a subway car is the ultimate fear/fantasy.

Are you okay?
Everyone nods, smiling in front of their sweat.
I say yes we are okay.
We have been down here a century, a decade, a moment. (15)

The poet’s opening meditation “When the fire’s moving it can sound like a freight train.” The poet driving this train will get you future bound.

Anna Limontas-Salisbury an educator, writer, and poet. She is currently a social distancing grandmother, AKA Grand Diva. Her poetry was showcased by Emotive Fruition, a live performance series, in 2018-2019. Sweet Action Poetry Collective published her most recent poem “Call Your Mother”. She is currently contributing poetry book reviews for the Mom Egg Review.