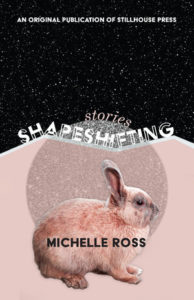 If you’ve ever compared your family to the perfect families captured in Facebook posts and felt, despite your awareness of social media’s tricks, that everyone else has their you-know-what together, then the families in Michelle Ross’s second collection of short stories should make you feel a lot better. Ross’s characters are real — flawed, overanxious, exhausted women just trying to navigate the challenges of motherhood, selfhood, neighborhood.

In Ross’s world, motherhood is the ultimate shapeshifter, beginning in pregnancy when “[your]belly is hard as a rock . . . a huge geode, the fetus, a milky quartz crystal” (37). How can women expect husbands, single friends, to understand the transformation? After she dreams of dissecting her husband, the titular story’s narrator wakes him and says, “‘You’ll never be a host . . . Not unless a botfly burrows into your skin. Think about that. A creature inside your goddamned body. In your core. Directing your body’s activities’” (39). And so, the possession begins.

The stories are told through the point of view of women, only two of which are not mothers, and they share a dangerous world. One woman is the product of rape, another has barely escaped an assailant. One insists on visiting the site of a mass shooting. And, as scary as pregnancy sounds, it has nothing over motherhood itself, and especially those years when a parent is solely responsible for ensuring her child’s safety, a role which has women awash with guilt for things like worrying their son’s small penis is a result of the soy milk they drank while he was in vitro, or that their child will be left out of an exclusive kindergarten unless they camp out for several days in a line of cars, or that they are responsible for the content of their sons’ nightmares. Mothers keep an eye out for rattlesnakes at the school carnival, or, in the most extreme case, lock themselves inside their houses observing a safety protocol to protect their daughters while, outside, childless women do such magical things as walk dogs and exercise.

Ross does supply several of these women with a recognizable lifeline — the friend to whom one confesses all. In “Three-Week Checkup”, Deena’s infant eats non stop. She’s starving for some chicken parmigiana and for a husband who will take an active role in raising their child. When she floats the idea of knocking herself out with Ambien so that when her husband comes home and finds her incapacitated, he’ll be forced to parent, “Deena had expected her friend to laugh devlishy on the other end of the phone, to give pointers” (165). Instead, Hazel listens, even offers to come over to help, though “she didn’t sound particularly enthusiastic.” In “The Difference Between Me and Everyone Else,” a woman who has just received a DUI, tries to navigate the wine cult popular at gatherings of mothers. Her friend attempts to console her by saying her arrest “could have happened to anybody . . . the state’s no-tolerance DUI law is ridiculous” (185). Despite the fundraising groups, birthday parties, neighborly chats across driveways — all the ways in which women drift together during the years they are raising young children, there is a unique feeling of isolation. Fortunately, as in real life, these women resort to that one soul who knows them better than all others.

The writing throughout this collection is compelling; the dialogue is especially authentic. But what really propels this group of stories is that Ross’s characters invite us into their most vulnerable moments and confess the kinds of imperfections that keep plenty of mothers awake at night. Ultimately, as one narrator reminds us: “all children are experiments — messy, uncontrolled, long-term experiments. Every day, there’s more to observe and discover.” And so it follows that every day, there is so much more we mothers are hoping to get right.