Alba for my Grandmother

You were cunning, strong, fierce as a she-bear with cubs,
no less then death could stop your bustling, your clatter,
your burrowing among all your pots for that one small pan
to fry me one small egg.

Mom and I lived with you and grandpa
when I was small,
Daddy was in Europe fighting
in the war to save the Jews,
Grandpa’s job was his factory,
your job was feeding us.
You loved to cook.
You were so good at it,
aunts, uncles, cousins were
always dropping by at dinnertime.
you were rich and yeasty as
your own new bread.
You always kept a kettle on.

I grew up. sort of.
Grandpa died.
You stayed in the old house,
still cooking,
Whenever I visited
you made a big fuss,
fed me your stuffed cabbage
or kasha varniskes,
told me stories about
when you were a girl
in the old country

You grew older and older,
One day you forgot my name,
called me Ida, after your dead daughter,
told me you didn’t want to die.
but they got you anyway and ferreted you away
to the land of old people who wet in their beds.
I couldn’t stop them, I tried, how I tried,
but not hard enough,
and you died, alone and cold among the senseless
keening of those who never knew you,

At the funeral the coffin was closed,
I wanted to read the last note on your face,
but the rabbi said at orthodox funerals
they always close the box,
as if there could be an end to you,
but what did he know,
rabbi or not, he was he was only a man,
but I am the granddaughter
of my wise, wise grandmother,
who now lies down with the worms
and tells them stories of family fights,
nuptial nights and morning glories
while they sing in ecstasy within her
like paupers at a holy feast
I know,
I hear them. 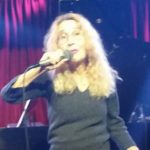 Tsaurah Litzky is a widely published writer of poetry, fiction, erotica, memoir and commentary. Her poetry books are Baby On The Water (Long Shot Press) and Cleaning The Duck (Bowery Books). She has published 12 poetry chapbooks, most recently Full Lotus (NightBallet Press). Tsaurah lives on the Brooklyn waterfront where she can see the Statue of Liberty from her kitchen window. She is working on a new poetry book, “Beneath Brooklyn Bridge.”