In an Almost Empty Room with Ellen Bryant Voigt

Last-minute funding blows the poet into town.
Little notice, late notice, the difficult location
at the commuter college downtown leave
most of the hard blue chairs out of work.
We who swam against the tide of our lives
huddle together, unblinking as fish.

She begins with syntax, her research into
neuroscience, cognitive dissonance,
where she breaks a line now, and why.
She reads one of her poems, laughs,
coughs, removes her bright silk scarf,
taps her fingers on the desk, gets up
to write on the board, sits down again,
and taps some more. We fail her,

too stupid to ask the right questions,
too terrified to shake the tree.
The almost empty room remains vacant,
the dark fin of genius circling us,
leaving us thrilled and shattered in its wake. 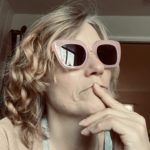 Originally from Virginia, Hilary King is a Pushcart-nominated poet now living in the San Francisco Bay Area of California. Her poems have appeared in Minerva Rising, Belletrist, Fourth River, PANK, The Cortland Review, SWIMM, and other publications. She is the author of the book of poems, The Maid’s Car.