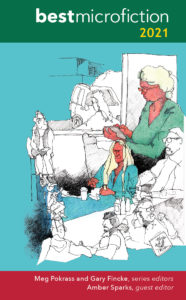 A Micro Review by Celia Jeffries

Don’t judge a book by its size. This anthology, in keeping with its content, is the size of a postcard. There was a time when people packed a whole story on a postcard, recounting travels and experiences, telling others of the worlds they’ve discovered.

Open up Best Microfiction 2021 and you’ll discover whole worlds in less than 400 words. Some are pure poetry. “Instructions for cleaning a mirror” by Sarah Freligh (57) begins with four words: “I have my secrets,” and takes us through a mobius strip view of life centered with a perfect image: “Yesterday a yellow pill pinned the sun to the center of the sky where it remained unstained by clouds.”

Titles are everything in microfiction, setting up time, place, context. Epiphany Ferrell tells a heartbreaking story in a list of nine “Places I have peed.” (53) And then there is the story that lifts itself off the page in the midst of what seems to be a writer’s series of attempts to define the story itself. “Med(I)a” by C.C. Russell is a litany of sentences that begin with the phrase “A story that…” (156) allowing the reader to gasp in realization when the real story appears.

Carry this book in your pocket. Reach for it instead of your cell phone, and marvel at how a writer can use so few words to create such an enormous story.