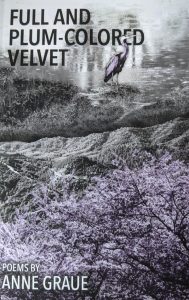 Anne Graue’s first full-length collection of poetry, Full and Plum-Colored Velvet, expresses the beauty and loss rooted in Kansas. This collection was fittingly published by Woodley Press, a small publishing company dedicated to showcasing Kansas artists and subjects. Divided into three sections, Graue’s book moves from narrative childhood memories in Kansas to lyrical and metaphorical poems revolving around the speaker’s mother in addition to poems about belonging in one’s family. Some poems in the third section bring readers outside of Kansas to Kenya, where the author taught for three years, as well as meditations on parenting and aging.

The first poem in the collection, “Barbed Wire Fences and Billboards,” has a haunting specificity of images that sets up the location and atmosphere where many poems in the book will be situated. Graue plays with white space on the page and utilizes lists and fragments to portray the vibes of her Kansas homeland. The second section of this poem reads, 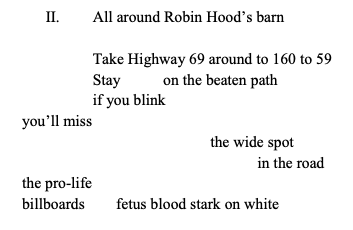 Graue ends this poem with the phrases,

Graue’s language of death, from “fetus blood” to “the Clutter family ghosts” adds a threatening sense to the otherwise typical images of small-town America in the diction of the people who live there: “Storm a’comin’,” she writes, and “Red sky at morning / far from / any ocean.” Graue’s images of Kansas continue to build an authentic, nostalgic place. Her adolescence is described in the poem “The Wages of Sin” (12) as having the freedom to push “muddy heels through soft dirt” while danger lurks everywhere, especially in the weather of potential tornados – “…we watched funnel / clouds twist, furl, and jump into the sky” – and in the existence of drug-using neighbors in the poem “This House” (13).

The images in Graue’s early poems are often of simpler times, such as playing “softball in the backyard” and building “tents outs of quilts / with my sister who I locked out / one afternoon…” She peppers pop cultural references into her poems, including Neil Diamond and David Bowie and radio personalities as well as reading books that influenced the speaker’s view of the world as a child, especially Little Women; one poem is a letter to Kurt Vonnegut who she hopes to “meet for a drink / and talk about Cat’s Cradle or / Slaughterhouse Five.” Readers will be reminded of their own precious childhood memories, but Graue doesn’t stop at the sentimental.

Many of her poems include lingering apparitions in the sparseness of the landscape as well as a sense of uncertainty and fear surrounding her mother’s behavior. In the poem “Passive Smoke,” Graue writes about a mother of five who offers her daughter a cigarette at age 12, declaring, “if you can’t / beat ‘em, join ‘em!” (37). There is a recurrence of the color red throughout many poems, which often works as a warning sign when dealing with her mother or potentially dangerous romances. Once her mother dies, Graue writes about sorting through her mother’s stuff with her four siblings and claiming specific objects in this house of both loss and sanctuary. Childhood memories continue to resurface into adulthood, especially those that are specific to the land, such as the “creek of crawdads and minnows” and “the big park with the huge merry-go-round” in the poem “Remembrance” (45).

Towards the end of the book, the poems shift perspective to that of a mother of an adolescent daughter who seems to be struggling with depression. A few poems use baking as a metaphor for exploring change in identity and relationships. In the prose poem “The Center,” Graue writes about donuts simmering and turning golden in the oil. As she watches them cook in her kitchen, she writes, “[I] do not know what the outside indicates about the status of the inside,”(68) which reflects her feelings of inadequacy and doubt when it comes to responding to her daughter’s cuts on her arms and many body piercings. It is this uncertainty amidst the beauty and suffering of both childhood and aging that make this collection a poignant, masterful accomplishment.

Jamie Wendt is the author of the poetry collection Fruit of the Earth, which won the 2019 National Federation of Press Women Book Award. Her poetry, essays, and book reviews have been published in various literary journals and anthologies, including Lilith, Feminine Rising, Literary Mama, the Forward, Green Mountains Review, Third Wednesday, and Saranac Review. She holds an MFA from the University of Nebraska Omaha and teaches and lives in Chicago with her family. https://jamiewendt.wordpress.com/