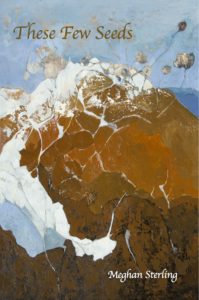 I tumbled through Meghan Sterling’s debut full-length poetry collection, These Few Seeds, the poems loose gems in my hands. The facets of each are similar—domestic inspiration and intimate meditation made transcendent across branching sentences—and yet each left its singular impression. If you open to any poem at random—“Still Life with Snow,” “Monsters in the Water,” “Her Body Bends like a Tent on Fire”—you’ll want to dig in and experience them all.

Whether romantic and familial, love is this book’s gravitational pull. “Memory is a Greek Island” delineates love’s boundlessness: “I decided here to love all that I was given, / no matter how much it hurt” (13). “Daughter” (23) further explores love, beginning with a definition:

I dream that the earth is on fire beneath us—
that is what love is. I take you
into myself as though you are the petal
pink to the open hand, a plum stone sweet.

And nature shows ways to love, too. In “Asterism,” winter’s light pattern “shines in the snow that ribbons up / the trees’ wide arms after a winter storm, / which is how we love each other” (27). Even the coldest season gets adoration in “Hiver, Mon Amour,” where the speaker declares: “Keep me still, Winter. / Love me into the hard hard ground” (54).  As the angles of these meanings accrete, these poems yoke the pain of love lost with the joy of love created.

The love found in motherhood sparked many poems in These Few Seeds, and I admired them especially. From the way the pain of labor became the baby’s way of insisting “it was time for me to be more than me” (“Bliss” 55) to the way Sterling delivers sounds of a new, sleeping baby— “her perfect breath always in earshot, / a weathervane, right as rain” (“Adeline” 14)— details become emblematic of what motherhood means. Her poems make me recall that moment when my world shifted on its axis, too. In “Morning Prayer,” the speaker recalls “standing at the beginning where we can hold / the new of her, the new of who we had just become” (7). The repetition of “it is the beginning” throughout, as well as its placement as the first poem in the book, draws out a sense of the sacredness of becoming a parent.

Among her meditations on motherhood, Sterling includes generational legacies; poems in These Few Seeds span the past and imagined future. In “Jew(ish)” the speaker outlines cultural connections, even if they are only the “small traces” of a menorah, mezuzah, and mizpah ring (21). In “Where We Can Be Wildflowers,” the speaker associates with color: her home’s “Countertops the color of mud, like the streets of the Kalitsky shtetl, / the hems of my great-grandmother’s one dress” (28). In doing so, she recognizes the way her dreams overlap and diverge from those of her ancestors. Other poems flash forward, the speaker wondering what condition the environment on earth will be for her daughter’s generation. In “Codicil” (45) she catalogs what might become of the planet:

I appreciate the ways Sterling connects the global issue of climate change with parenthood because it grounds and personalizes the urgency of action that political poems tend to exhort. The beautiful worry in “Codicil” inspires me to seek out the anthology Sterling co-edited, A Dangerous New World: Maine Voices on the Climate Crisis, to find similar writing.

Loose free verse dominates These Few Seeds stylistically. I really enjoyed Sterling’s use of long, branching sentences that seek to redefine, describe, and elaborate upon the kernel of inspiration. Although some, such as “Sidekick,” use catalogs of metaphor in discrete sentences, in others, such as “Camera Lucida,” sentences often unfurl over three or four lines. In less skilled poets, this style reads as messy or raw. Not here. Over the course of the collection, I began to anticipate the ways an image would gain depth or range as Sterling added phrases or clauses. These poems read are well-crafted yet maintain an accessibility that readers new to poetry will appreciate. I recommend adding These Few Seeds to your collection.