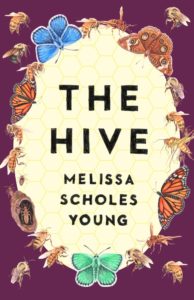 The Hive puts a finger on what American media has been chasing since the Tea Party formed and through Donald Trump’s term as president: small-town Midwest Americans’ motivations. In her second novel, Melissa Scholes Young gives us the Fehlers, a working-class family holding on to a struggling small business during the height of the Great Recession. Through self-discovery and economic necessity, the Fehler Sisters move the family into the twenty-first century, but not without pain and suffering.

The book begins with the Fehler Sisters at their fishing camp on the Mississippi, thinking about what could have happened with their family’s pest-control business and reminiscing about summers past. As children, when they made weekend pilgrimages to the camp, they would recite passages from The Adventures of Huckleberry Finn on the way. For example:

‘Jim said that bees won’t sting idiots, but I didn’t believe that, because I tried them lots of times myself and they wouldn’t sting me,’ and they all giggled because bug girls knew how to handle bees. They also knew the hive’s survival mattered more than any puncture. Like Huck, they’d sacrifice to save each other. Like Huck, they loved their pap, even when he disappointed them. (4).

This speaks to the points of discovery and sacrifice each sister will make throughout the novel, as well as many disappointments from their father, Robbie.

Save for the epilogue, The Hive is divided into chapters devoted to one of the Fehler women. First, we meet Maggie, the oldest daughter. She has business savvy and is eager to inherit Fehler Family Exterminating, a fourth-generation company in their small Missouri town. She is fastidious and determined, but aware her gender prevents Robbie from seeing her as fully capable. However, “[it]was never clear if her dad dismissed her because she was a woman or because she was his daughter.” Maggie perseveres and “keeps claiming her place until he was proud and impressed enough to notice” (15). She has a plan she believes can save the company from the recession, but Robbie is reluctant to make the investment.

Grace, Robbie’s wife, is introduced second. “Grace knew she’d be the one to save them all in the end,” but she is not worried about saving the business (21). Convinced by Right-wing propaganda that the end of civilization is nigh, especially with the possibility of Barack Obama winning the White House, she is serious about preparing for the end of the world. She equips the family with Bug Out Bags, or BOBs, rations, ammunition, and shelter supplies. Like Maggie is exacting in business, Grace is exacting in prepping for an imagined apocalypse. Her prepping is meditative, and these prepper activities keep her grounded for most of the book.

Jules is the second-oldest daughter and is the first in her family to attend a four-year college. She’s an idealist, a lover of the humanities, and a nascent feminist. She falls for a boy her family may not accept. And the youngest daughter, Kate, may not ever fall for a boy. Tammy, the family beauty, is finishing high school and has a heavy secret that will define her future.

Scholes Young treats the characters fairly, bringing insight into realistic financial and social concerns of traditional white American families. This is not to say that she excuses their systemic and casual racism, sexism, and other social ills. In fact, she challenges her characters without mercy. And when Obama states in his victory speech that “change has come to America,” we know that the Fehlers and their town are part of that change (187).

But what carries The Hive more than the themes and the characters is the gorgeousness of the prose. Sholes Young invites us into the Fehler family dynamic and the fascination of white Midwestern lifestyles with potent language. For instance, this description of a storm after a life-altering funereal: “The fading light was low, but she could see slivers of a perfect pink midwestern sunset. Thunder growled a few miles south. Missouri was humid. The whole state was a wet blanket” (109).

This short novel covers a lot of territory: racism, adultery, homophobia, recession, bankruptcy, secrecy, small town cronyism and politics, class, interracial relationships, and so much more. It seems almost too much, but Melissa Scholes Young does not give any one of these issues short shrift. She handles each subject like she handles each protagonist: with care and attention. It makes sense for a book with multiple storylines and problems to have varying viewpoints throughout.