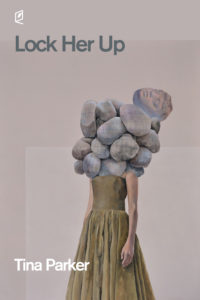 In her haunting book, Lock Her Up, Tina Parker switches effortlessly between writing persona poems, concrete poems, and epistolary verses, as well as transforming medical forms based on real-life response into poetic renderings. My only criticism is that at the end of the book I was left bereft because there was not more to read. I wanted longer poems, as well as many more. Then, I began to see the sheer impossibility of demanding more from these voices inhabiting the author’s being. These desperate voices must have been terrifying to discern. Crafted from documents culled from 19th and 20th century patient records of the Southwestern Lunatic Asylum in Marion, Virginia, these poems are really an historical record of how women have been treated by the male-dominated mental health establishment. Often misdiagnosed, women who reacted emotionally to a particular situation or circumstance were deemed hysterical, insane and destructive to themselves, and possibly to those around them.

Neatly partitioned into three sections, the poems follow the logical path of someone who has been sent to an asylum: Admission, Treatment, and Release. But that is where any semblance of logic ends. The poems in the first section showcase the heartbreaking realization that women were often condemned to the asylum as more of a punishment than a panacea or place of healing. In the poem, “Pleas for Admission,” we hear from a son, a father, and a husband asking that doctors take their female counterparts because of nebulous characteristics such as vulgarity, or restlessness. “Will you take my wife/She complains a great deal…”Will you take my daughter/She is a constant aberration…”Will you take my mother/She has done nothing for the past 10 or 15 years.” (5)

In the second section, Treatment, women who were often skilled herbalists were seen as witches. In the poem, “The Before Time,” a woman remembers accompanying her grandmother who knew which plants eased all manner of ailments, “Used to be/I’d go with her/I had a quick eye/For all manner of roots.” (25) The woman points out that in the “modern” time that she is now living in, these organic treatments are maligned and laughed at: “The nurses mumble/And bring more bromide/They curse and spit/The word Witch…” (25)

In the last section, Release, there is the harrowing poem, “All the Ones I Do Not See.” (48) This poem reminds us that the terrible truth of many women’s “insanity” was often because they were grieving or angry about what had happened or was currently happening to them. Their anguish was sometimes because of physical or sexual abuse, loss of a child, or unexamined pain from an underlying illness that had nothing to do with their minds. “I saw a mother open her mouth and eat/The doll whole/That woman was not (me)/And I saw the man who was her father/He put the baby in her but he was not (me)/… All the ones I do not see/In the asylum/They call to me” (48)

Though history is written by winners, they have lost this battle. At the end of the book, we see that it is free will, self-reliance and self-love that encompasses the only truth there is. There is no help from God or medicine, or doctors. “God save me. God could not. Safe here away from him…/A door./Another door (door after door) and I open…” (54) Then, readers are catapulted back to the prefacing poem, “The Day They Came for Me” and an inmate’s recognition of her own sound mind is celebrated and rings with clarity: “I sliced open the sun/I walked the tight rope/And touched the moon/I drank stars that day/I danced with a tree/Climbed into thunder/The day they came for me/I cartwheeled into the sea/And sang open the snow.” (1)