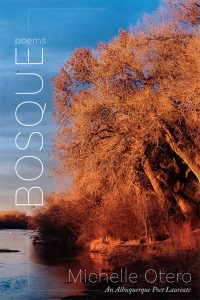 I’ve never been to New Mexico, but after reading Bosque, a collection of poetry from Albuquerque’s poet laureate, Michelle Otero, the landscape rises before me: coyote fences, January yucca fronds, lanceleaf sage, salt cedar, mesquite pods. The poems assembled here read like a catalog not only of place, but of family, of a history that is personal, cultural, and geographical.

In fact, the book’s title derives from the cottonwood forest that borders the Rio Grande and runs through New Mexico. Part wetlands, part farmland, part riparian forest, it is as unique as it is endangered, despite the animals and plants its ecosystem supports in an otherwise arid habitat. However, cottonwoods are particularly hardy trees who thrive despite the river’s changes, a metaphor Otero’s work implies for the people who settled this area as well.

Otero frequently resorts to the plural pronoun “we”, an indication that she speaks, not just for herself, but for those who have come before her, and those who share this time and space. In fact, these people can’t be separated from the physical world that surrounds them. She says, “We are older than this country, created/in the collision of peoples from across oceans and the center of the earth/ . . .We are willow and reed/dust and ash” (2-3).

Otero’s poems are full of las abuelas and mothers and neighbors.  In “A Prayer of Thanks for the Givers” she expresses her gratitude to everyone from los abuelos who fought in World War II to Sandra Cisneros. The poet is especially grateful to the women from whom she descends. In “What I Know” she crafts her own matrilineal ancestry, those lessons of power she derived starting from her knowledge of Aztec goddesses, and moving on to her grandmother, her mother, her high school classmates, her own daughter to whom she speaks:

She voices the thanks of her generation. Though she may wonder: “Who will remember our prayers?/Who will harvest the corn? Who will sweep the graves?”, in this life, it is clear that the speaker has been a dutiful descendent, tracing her own history to those who made her possible (26).

Growth is a motif, as is the idea that language is problematic — there is the English that her family spoke so that they would not sound “Mexican”, and the Spanish that rises, too, in moments when one language isn’t enough to express what she feels.

One of the collection’s strongest poems is one of the only ones where the poet concentrates on her personal history. “Where the Border Isn’t a Metaphor” recounts memories of what it means to be different, to have one’s citizenship questioned, to consider the arbitrary nature of invisible borders:

I think of my older brother who, as kids, told me
the stars pinning capital cities to maps
were visible from airplanes. That’s how they know
where to land. He said the line between states
were dotted so we could drive across them (38).

Ultimately, this is a collection full of praise poems, full of gratitude for herbs and rain, librarians and storytellers, brothels and the circus. The poet acts as chronicler of a place and all of its times. In one poem, she wonders: “When was I last alone?” (25). The answer seems to be: never. How can any of us separate ourselves from how we arrived here and what natural forces are at work in the creation of our familiar landscapes? And why would we?

There are days that the tragedy is too
large to bear, to shoulder alone, and we gather

in the name of prayer and poem. We gather, in the ways psalms
collect words, sacred incantations of remembrance.

We gather, because together our spirit is ineffable
Enduring vigil, votives lit and we shall not forget.
We shall not forget that love forges on,
beyond acts of terrible violence,
beyond (70).

Otero reminds us that, despite our communal griefs, there is also communal strength, the kind that inspires generations to forge ahead, hardy as the cottonwood adapting to constant changes in the world around us.

Carla Panciera’s collection of short stories, Bewildered, received AWP’s 2013 Grace Paley Short Fiction Award and is available from the University of Massachusetts Press. She has also published two collections of poetry: One of the Cimalores (Cider Press) and No Day, No Dusk, No Love (Bordighera). A high school English teacher, Carla lives in Rowley, MA.