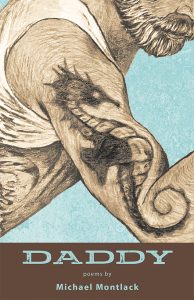 Daddy is an exploration of relationships and self. By turns heartbreaking and humorous, Montlack’s writing is accessible without being superficial.

The 56 poems, most one page long, are arranged into three sections: Daddy, Mother, and Father, with the first poem, “How to Mother Like a Man” set apart as an introduction.

In looking at that first poem, an echo of the book cover which depicts a seahorse tattoo on flexed male biceps, it frames our mindset for how to view the poems that follow: men are nurturing, but still protective and strong. Plus, there’s a subtle sexuality in words like sleek, ridged, and inflates and of course the capitalized Queen.

How to Mother Like a Man
I like how the male seahorse gives
birth, making it easier for the female
exhausted from egg production,
how the round, puffed belly looks
like my father’s beer gut, how
despite the protrusion, he appears
sleek, in suspension, ornately
ridged, that curlicue tail coiled
demurely until it’s ready to link
with his mate, who inflates him with life, a live chess board piece
moving nonchalantly in the current,
gentle but with intention, a knight
really, doing whatever it takes to protect the Queen.

The first section, Daddy, contains poems based on the gay experience—life in the aftermath of the AIDS epidemic, dating and heartbreak. We learn of Rock River, Vermont, “(The land purchased by and for gay men.)” (29) where several hundred gay men congregate in the summer, and “gay Morse code” (30) at the office. A series of three poems, each titled, “Dickorum” delve into the decorum of gay behavior in various situations.

The second section, Mother, explores the more traditionally feminine, while defying the gender label. Female friends, mothers, sister, a niece, Downton Abbey, Medusa and Stevie Nicks all make appearances. We learn that the writer was adopted, and in the poem, “I’ve Been Told My Birth Mother Believed in Aliens” we see the writer as questioning yet compassionate towards a woman who abandoned or surrendered six children. We watch Montlack take care of his dying adoptive mother, attaching her colostomy bag, tender and grateful in the poem, “Masculinity.”

My favorite of this section is the poem, “Toast” about the death of his mother, which really hit home to me as my own mother is approaching the end of her life. There is so much love in his words.

I think my reincarnation’s inevitable.
At night I whisper: Shall we be friends
next time? Cousins? How about sisters?
Though I am certain: I will be her mother. (43)

The final section, Father, explores Montlack’s relationship with his father, also deceased, his grandfather, and his own role as uncle. His description of his father’s dementia in “End Game” is heart wrenching:

Sometimes he’d reach from the recliner for his Dalmatian, dead
ten years, then reach for me with eyes
that wordlessly requested an explanation, (80)

yet the overarching theme is one of acceptance of his adoptive parents as always being enough. Montlack explores his own future death at the end of the collection, but the feeling is one of fulfillment and acceptance.

Michael Montlack is author of the poetry collections Daddy (NYQ Books), Cool Limbo (NYQ Books), and editor of the Lambda Finalist essay anthology My Diva: 65 Gay Men on the Women Who Inspire Them (University of Wisconsin Press). Recently his work has appeared in Prairie Schooner, North American Review, The Offing, Cincinnati Review, Court Green, and Poet Lore. His essays have appeared in Huffington Post and Advocate.com. This year two of his poems were nominated for Pushcart Prizes. He lives in NYC. Find more on his website: https://www.michaelmontlack.com/.