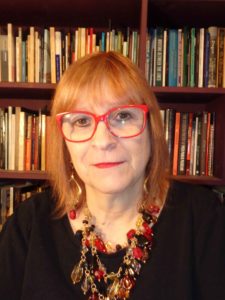 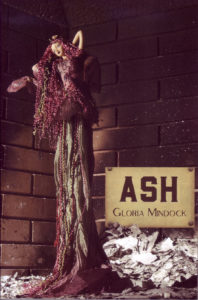 Occasionally a poetry collection comes along to remind us of the fragility of life and the volatility of relationships. Gloria Mindock’s new book, Ash does just this. With spare language and stark details, the debris left behind by fire becomes a symbol of the ways humans fail each other. The human heart, erratic and misshapen beats the rhythm of these shortcomings in poem after poem.

Ash, ponders what remains after relationships smolder and fizzle out, and the range of destruction that can be wrought becomes a dominant narrative throughout the collection. The book is divided into four sections, Burnt, Baked, Buried, and Opposition. Fire is used as a metaphor for failed passion and human cruelty in poem after poem. The heart, often heralded as a symbol of love and life, is flawed and easily destroyed. In the poem, Protected, “The man surfaces his heart, /He carries it away delicately.” (p. 3). Even nature offers no solace, as the poem Sky aptly illustrates. “The air was crisp, the sky clear, /like when someone dies, the emptiness/is always there.” (p. 17). This is not poetry designed to comfort but rather art that exists to help us to face our own shadow side.

What remains when the worse impulses of the human race are allowed to run rampant? From simple tasks turned into tests of relationship, to the certain betrayals that follow attractions, Gloria Mindock does not look away from this baser side of humanity. In the poem, Carrots, a domestic task turns into a wound that spoils the appetite of the lover.

“There is blood on my hands
from the knife.
It was an accident I said as I
sliced the carrots into tiny roundness.” (p.22)

In the poem, Disloyalty, the letdown is expected, as if all relationships have a deadly flame waiting to consume a house or scar a person.

In the third section of the collection, Buried, the author takes the reader further into this doomed landscape. In the poem, Light, “blackness empties into the light.” and “It is over between all the hearts/that yearn.” (p. 43). Veterans, lovers, soldiers, and hapless humans share a sense of brutality. The exaggeration of violence serves this collection, showcasing a human penchant for mayhem and the exploitation and harm of other humans. Is anyone innocent? Are we all culpable in this unraveling tale of the darker impulses of the human race? In exaggerating acts of violence, fire, and the eventual death of everything and everyone, Gloria Mindock calls attention to the spiraling crises facing the world: climate change, domestic abuse, poverty, addiction, homelessness. In the poem Time, the speaker says, “I can forgive the city/Forgive the power it has over me.” (p. 46).

The last section of the collection, Opposition, is written theatrically, with initials used for people who meet varied challenges and endings. Imaginative and dark, this section has a playful tone in its sensual descent into death. Fire creeps in, people meet unlikely ends, and the reader ponders what is truly left when life is pared down to the bone. Blunt language, combined with a flair for the absurd help to create a vivid tableau of fishnet stockings, alligators, booze, and toy soldiers.

The brutality of the modern world is something that numerous poets and writers have addressed in their work. In Ash, it is less reported upon than actually experienced through the lives of characters like Albert who says, “It feels good to own/the dark alleyways.” (p. 53). Perhaps that best sums up the bleakness of these poems; sometimes one must descend into the depths to understand the trajectory of the human race in this time period. The challenge is on to find the beauty in fire, the redemption after betrayal, and the reasons for venturing out into a world that often times seems irretrievably broken.

Gloria Mindock is the author of I Wish Francisco Franco Would Love Me (Nixes Mate Books), Whiteness of Bone (Glass Lyre Press), La Portile Raiului (Ars Longa Press, Romania) translated into the Romanian by Flavia Cosma, Nothing Divine Here, (U Šoku Štampa), and Blood Soaked Dresses (Ibbetson). Widely published in the USA and abroad, her poetry has been translated and published into the Romanian, Croatian, Serbian, Montenegrin, Spanish, Estonian, Albanian, and French. Gloria has been published in numerous literary journals including Gargoyle, Web Del Sol, spoKe, Constellations: A Journal of Poetry and Fiction, Ibbetson, The Rye Whiskey Review, Muddy River Poetry Review, Unlikely Stories, Pratik: A Magazine of Contemporary Writing and Nixes Mate Review and anthology. Gloria has been awarded the Ibbetson Street Press Lifetime Achievement Award and was the recipient of the Allen Ginsberg Award for Community Service by the Newton Writing and Publishing Center. She received the fifth and fortieth Moon Prize from Writing in a Woman’s Voice. Gloria was the Poet Laureate in Somerville, MA in 2017 & 2018.

Lisa C. Taylor is the author of four collections of poetry and two collections of short fiction, most recently, Impossibly Small Spaces (2018). She was awarded the Hugo House New Works Fiction Award. A new collection of poetry will be published in late 2021 or early 2022.