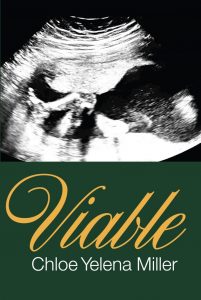 In Viable, Chloe Yelena Miller gives herself space to mourn, celebrate, and atone. This debut full-length collection is a candid chronicle of Miller’s experiences with miscarriage, pregnancy, and new motherhood. Miller finds the melody in the language given to women regarding reproduction and loss. And to address these heavy events in her life, she looks to where she finds comfort: the English and Italian language, food, family, and poetry.

Viable begins with the poem “Mid-Thirties.” The language here is easy, inviting, and the perspective borders somewhere between innocent witness and desperation. Here, a toddle hides behind the legs of her mother, the mother whispers to the child, and the speaker admits in two conspiratorial closing lines, “I, too, know what I would say to a shy child, / given the chance” (1). “Mid-Thirties” serves as a compass rose for the rest of the collection, as well as insight into the poet.

The poem “Carrying,” begins with directions of growing an avocado tree, but Miller admits that “it’s never that easy” (10). The poem voices the second-guessing of her actions with caring for the avocado until she quotes, “most miscarriages /aren’t mama’s fault / doctors say. / No one says much else” (10). Because of the sudden but well-managed shift from avocado seed to miscarriage, and because of the condescending language reserved for these situations, these lines hit hard. Although we are aware of the miscarriage, the shift is galling after the innocuous avocado.

The next chapter recounts her second pregnancy, and begins with “Question of Love.” Miller shows hesitancy, saying, “You, I must love later,” deeming five weeks too early to know whether the baby will survive.

The third chapter is about the aftermath of giving birth and being a new mom. The poem “Birth Announcement” brings on yet another aspect of pregnancy and motherhood, and that is postpartum depression. “Empty,” it begins, “I’m a renamed woman—Mom— / holding a baby. He screams” and in the next stanza, “He screams and screams and screams” (40). Renamed and redefined, she has a responsibility in a now unromanticized role. Her baby doesn’t cry, but screams. The poem ends with discomfort from the c-section scar, wanting to walk away, and into the sun. This may feel like a surprise—why would a mother who has suffered through a miscarriage have postpartum depression? Wouldn’t the screams be welcomed? But Miller deftly explains the abrupt transformation of pregnancy to motherhood. Later in this section of the book, “Post-Partum Depression” boldly explains the frustration of early parenting.

Some of the poems in “Carry” are labeled in ages of the child she now has, so “Carrying” and “Carry” serves as a kind of before and after. “Post-Partum Depression” is measured in “months of medication” (55) and though it comes well after “Birth Announcement,” her baby’s screams are mentioned again: “If I’d known I could’ve called the ER when you screamed / so long, so loud, / tongue quivering, head thrown back” (55). Though here, although there is despair, Miller shows hope. In the last two lines, we know she gets well and that she gets through it.

The book ends strong with “Apologies.” Every poem is an apology, but they also read like prayers. The book ends with “Your Creation Story,” which goes back to when Miller met the child’s father, and follows the couple to the desire of sharing that love. It’s addressed to the child, “It comes to this: Your creation is yours,” (72) and here, we see evidence of a healthy family.

In Viable, Chloe Yelena Miller makes plain many of the trials women who’ve had miscarriages and women who experience postpartum depression have. Her honest and beautiful, if not sometimes raw testament makes for an important addition to literature about motherhood and about miscarriage. But I wouldn’t reduce the work to only pain. Viable offers hope and joy. After loss, after depression, Miller shows that one could still find happiness in motherhood and self. Not only pregnancy is considered viable in this book.

DeMisty D. Bellinger lives and teaches in Massachusetts. Her chapbook, Rubbing Elbows, is available now and her debut full-length collection is forthcoming with Mason Jar Press. You can learn more about DeMisty at demistybellinger.com.