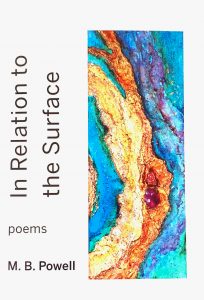 It took me a long time to write this review and one small reason might be the immense amount of craft and the nuanced beauty that went into these poems.  When someone else’s writing calls your own writing skill into question, how to write about that writing?  How to explicate those poems?  How to rise from immersion in a delicately and thoroughly rendered world full of rhyme and imagery that feels like an elixir every time you read?

M.B. Powell’s collection of poems, In Relation to the Surface, surpasses my already high expectations for this writer.  The collection is divided into four sections, “Below,” “Near,” “On,” and “Above” that are clearly relative to the “surface” of the title. The first section has me awash in loss and the longing for the past in a literal sea of imagery; almost every poem in this section references the ocean or sea in some way. In “The Littoral Zone” Powell writes,

So call it what you like—ossified womb,
dead egg, ceramic zipper, the snail long gone
behind it—but there’s nothing metaphoric here.
This was a house built in the littoral zone,
on the sand between the tidemarks, high and low,
built to weather by turns the breaking waves,
the unmediated sun and wind.  And for what?
All that effort to survive and thrive, to build
something lasting, and it will never be enough.
No matter how hard you’ve worked and planned
things change or you do. People leave or you do.
I see what’s in store: this bone house, this place
I made with you, my mainstay, quietly cast away (26-27).

After encountering such visceral imagery and feeling unmoored by it, I read and re-read this poem.  So much to unearth! Littoral zone for where a shell would reside but in a poem that discards the idea of metaphor, how can I not hear “literal” instead?  When childhood romanticism is stripped by adult reality, the speaker in these poems tells it like it is, and I can’t help but listen. The snail shell a house, a bone house, but who or what is the cast away?  Powell moves gracefully between the object of her imagery and the plight of human endeavors as if their connections were a given.

The rest of the collection is as powerful and immersive as the first. Between form, rhyme both internal and end, and the repetition of both words and wonderfully original motifs, Powell’s poems mine the complexity of animal, mineral, and human life with the grace of a swimmer cutting the sea.  This is a book to read in good times and in bad, and a startling reminder of how rich the world around us is.

Christine E. Salvatore received her MFA from The University of New Orleans. She currently teaches at Stockton University, in the MFA Program at Rosemont College, and at a public high school in South Jersey. When she’s not working, she hangs out with her dog, Lady Brett Ashley, and her boyfriend, Lee.