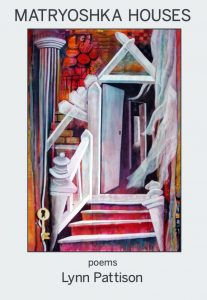 If home is where the heart is, the poems in Matryoshka Houses scaffold into a nuanced and poignantly structured life of love, loss, hardship, and gratitude. Collectively, Pattison’s poems provide a tour of intimate and magnified moments layered through time and in memory. Their imagery and descriptive elegance create a sense of immediacy, from scene to wistful scene, home to home, each summoned in rich detail.

In the beginning, there’s “My Pyramid,” (11) the poet’s thoughtful recollection of homes that cumulatively shape her existence and gradually merge through each stage of life. We are told “Each new home settled atop the last/overlaying     drawing its nature/from the course beneath.” From her childhood home with its “nooks and arches      curving stairs…” to a place of parenthood and then “blended family,” the poet presents these “ascending layers//each shaded and colored/by the last–” each subsequent house becoming a home where “ghosts of grief and joy weave/between the potted plants that purified the air.”

In “Soup” (13) the reader is given a robust and pungent recipe for a cynic’s broth, with ingredients like “shank of hard knocks/cheesecloth bundle of thorns.” While our appetite is tested by “pigs blood” and a “pinch of fungus from cistern wall,” the taste of bitterness is enhanced by

In comparison, the poet seeks solace, if not redemption, in a “kitchen/too small for baking…” in the poem “The Thing Behind, and the Thing Behind That:” [p. 24]

These are illogical days; nothing seems to follow
++++++reasonably another. I’ve given up on cause & effect.

Guilt’s like that, the more you dig for the root,
++++++the more suckers you find branching sideways,

The respective spaces and locales we encounter rise and collapse with their own emotionally charged vistas and a layered collage of domiciles that carry the voices of loved ones, stands ground through the forces of nature and time.  In “Not Until the Song” (26) a house still stands despite a fire and dousing, its ravaged façade belying a history roused and  preserved with the persistence of memory. Even as its “Shutters tear away in wind that slams/and opens and slams the front door…” and mice “still nibble/gleaned corn in familiar corners” the house still speaks to the life it had and the lives it held:

++++++++++++…if my father
remembers his father setting logs at dawn, his mother humming
++++++as she works the churn or winds yarn around

her son’s hands, life remains. The house echoes
++++++its old language—words that murmured the halls,
phrases that scaled the staircase. Calls that reached to the pasture
++++++if they had to. Here, the house sings, here I am.

Even as the recitation of homes materializes in various guises demonstrated in the fluid but complex juxtapositions presented in “Elusive,” (13) with “Kaleidoscope rooflines—sloped,  a “hipped/gabled” and rooms filled with an evolving inventory of personal possessions (“Jumble/of wax pilgrims and jewelry boxes with dancers”), we are reminded that “The story// of home can’t be unearthed by orderly excavation, studied one strata at a time—” its narrative ongoing and influenced for new each growth spurt or narrowing down with age and circumstance.

The notion of home also taunts a certain restlessness, an idea of being a migrating or  untethered spirit separated from a tangible, identifiable place, explored in the poem “The Dog, If I Had One. Maybe My Pillow:” (27)  “The homeless carry//their world in plastic bags—home any place they lay/their bedroll.” Are we defined by our possessions, and how to winnow down our collected souvenirs as we make our way to new and unanticipated homesteads? The poet wonders: “If I were on the run, a refugee, what would I carry?”

Matryoshka Houses compresses and expands the spaces of a life in progress, walls catching a certain light, the music of conversation and song, loved ones huddled or slipping out a door, rites of passage and seasonal ritual. Ultimately, the construct it builds is a sturdy but elegant testament to how we nurture and create a home through the vagaries of life. In the poem of the book’s title [pg. 32] we have the totality of a “Cunning construct of time and light. Close this one/into that, see how they fit inside each other. Fit me.” It is a sublime assemblage that gives meaningful shape to existence.