My preschooler fears fire, typhoons,
and lightning storms. He doesn’t chatter
about the Prairie School gas station
we scrutinized on vacation; he asks about
the wildfire described on the plaque
across the street. The burn and evacuation
happened years ago, I said, but he still woke
from nightmares where sparks landed
on his back. He selects books: What Makes
a Volcano? and The Ice Age. One snowflake
means blizzard. I heard the radio say
an ice storm’s on the way, he’ll whisper.

Months before his birth, his dad texted:
xavier rex. He liked the visual anchor
of ‘x;’ its meaning, ‘the new house,’
persuaded me. But neither of us knew
how to pronounce it. And now, this blond,
blue-eyed boy pronounces his own story:
how he hatched from an egg in Antarctica,
how his igloo caught fire. Does he sense

the convergence that caused his conception
despite his parents’ old age? Does he intuit
the serendipity that delivered him healthy,
whole? A body that dreams sparks sees no
distinction in extremes—everything’s possible. 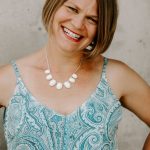