Its wings, its ribs, shoulders, its skin have a mind that desires — as the fires of spring desire — to be held, close, firm, firmly by hands.

Hold me, hold me the flesh choirs, it solos, it arias and wails.

The body knows its want.

In the red breakfast nook in the kitchen one Sunday evening after supper.

On one red bench, his brother and he. His brother against the wall. He on the outside.

On the red bench opposite, his mother against the wall. His father on the outside.

Light shone through the window, so it was spring, let’s say, let’s say May.

“Each of you can sit in your father’s lap now,” his mother said.

The embrace was doled. She doled it. For we were never held by our father.

Although snapshots do exist.

Yes, once, outdoors in a snowsuit in snow where, as a toddler, his father had to hold him because he could not stand.

And once as a baby swaddled in his father’s arms.

His mother held the camera — she wanted a Kodak for the baby-book — his father faced it — dutiful to the lens. The lens clicked when his father’s eyes closed.

The notion that his father should hug was foreign. A once-in-a-lifetime privilege.

He slid off the red bench and stood, as a visitor stands at the border of a foreign land,  decorous. He walked to his father’s strange knees.

His father bent down and clutched him.

Hauled him into the air.

Drew him to his chest. Encompassed him in his arms.

He clamped his chest to his father’s chest.

He already knew how to hug. Before birth this knowledge had been installed.

Since proximity to his father was new, to hug his father felt daring.

He prepared to prop, like a pot on a sill, his chin upon his arms around his father’s neck.

His father released him.

“Let your brother have his turn.”

“Stop this at once. Get down this minute!”

His father tried to pull him off.

He scrambled toward his father.

“You’ll be in serious trouble, unless you get down.”

He hadn’t had enough. He had barely been held.

“Roger, get up and let your father hold you.”

His father put him on the floor.

He burst into tears.

“Stop that this instant!”

He screamed with outrage at the shock!

His brother passed him.

He wailed at the injustice!

His father drew his brother up.

He wept. He bawled. He caterwauled.

“What a greedy boy. Stop this howling. Shouldn’t your brother have a turn?”

He saw his brother getting his turn.

He didn’t begrudge his brother’s turn.

But his own turn was not over.

She could not tell it was over. Only he could tell.

He clambered back up onto the red bench. As doom blossoms, so did his crying blossom as he saw hope die.

He would not stop.

But anguish is the last train. He saw his turn was over. His turn would not come back.

“Get down now” his mother said to his brother. “That’s enough.”

She gauged his father’s hugging had run out. She figured his father could hug only so much, and that not much. In her women’s magazines she had read about fathers hugging their children. And she decided to try it out.

She had done her part.

After that, it would be their father’s job.

One practice session should be enough.

And if his father never hugged them again? 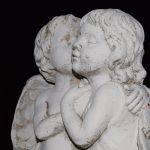 Bruce Moody’s work is published in The New Yorker, The National Lampoon, Michigan Quarterly, Botteghe Oscure, Look, Works, The Little Review, The National Review. Roadside: Will Work For Food Or $ won the Arizona Authors Association Award for the best non-fiction of the year. He is the author of the novel The Decline And Fall Of Daphne Finn, the movie blog: moviemoody.com, The Skittish Plays, and Water, of which “The Embrace” is the opening chapter.