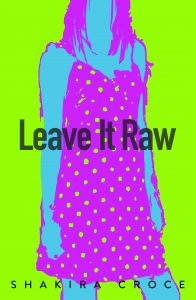 In Shakira Croce’s debut poetry chapbook, ​Leave It Raw,​ there is an awareness of the inevitable cyclical journey of life. Though the poems are organized in a linear manner, unfolding from youth to motherhood, there is an underlying cognizance that life, no matter where it begins and ends, is always an odyssey of circularity. Interlaced with this circularity is a profound exploration of the definition of home.

From her childhood in rural Georgia to the bustling and near-overwhelming urbanity of New York City of her adulthood, Croce guides the reader through mesmerizing memories and encounters that all lead to home. This is a home made up of the natural world juxtaposed to and yet intimately intertwined with her urban home. Movement and the frenetic pulse of city life is actually a haven for Croce as she navigates through the landscape of trains, buses, and car.

Croce doesn’t spend as much time in her childhood Georgia home and seems slightly alienated from it. Indeed, in her very first poem, “Blue Ridge Mountain Runaway,” the concept of escape is not only articulated in the title, but also in the line, “We escaped on the trail of rhapsody.” (1) This should not surprise the reader so much because in the very next poem, “The Remains,” we learn that Croce was never entirely accepted by her community where she once violated a delicate dress code. The adults on her street where she once lived whisper about her and sport “Confederate flags,” (2) and here emerges a weary recognition of hypocrisy.

Very quickly, the reader is thrust into the glimmering materialism of New York City: “Windows hold scenes of silver, gold,/and mannequins dressed to the nines.” (11) Yet, in spite of the anonymity that characterizes city landscapes, Croce observes with compassion the humans that are scattered before her. In “Commuters Pastoral” she writes: “Defiance and freedom/marked the face of the aging man…/His eyes held a history/of searching for prey or predators.” (60) Or it is the elegant movement of the ambulance driver who “steps out to smoke,/tapping ashes on Park Avenue” (10) that holds her riveted. And in “Departure,” on a bus she notes that “sitting opposite a man who looks just like the actor/who played that famous deaf pianist./ She caught and held/his gaze, with the tenderness and strength/of knowing that this would be the extent/of their intimate moments.” (11)

Throughout the various topographies of mountain, sea, rivers, and flat land, Croce draws us closer to her concept of home, which is balanced with the concept of motherhood. In “Prelude,” Croce writes, “My voice changed, softened/upon the first view of that/beginning of a human.” (28) In “Cycle,” the poet reminds us that “Motherhood reaches out/from the periphery, inaudible./As a rush of feathers/signals the flock/plunging toward the tree line/of pines puncturing the biting sky.” (30) Motherhood is a home in itself and Croce can rest in its shadow, secure in the knowledge that, ultimately, “Flowers waiting to procreate on a cliff above the sea/bring me back to where I was born./After spending a lifetime thousands of miles away/that simple power lets me know my home/is not where I live/but a long climb up from Roman rocks and ruins/to the stuff springing from/uncut earth.”(23) And with this final poem, the reader is pulled right back to an early poem, “Homecoming” in which the poet affirms that, “It’s about finding/the space/to bring out what’s already/inside you.” (4)