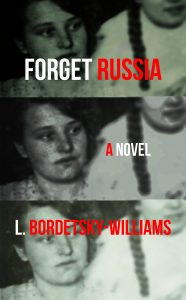 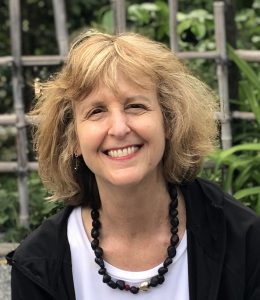 Forget Russia is a novel told in two perspectives, that of Anna, a twenty-two-year-old American student, and her grandmother, Sarah, who is living in Russia right before the Russian revolution. Anna’s story is told in first person, and we follow Sarah from a third person point of view. Each section is separated by a full page with the chapter title, followed by either a poem if it’s Anna’s chapter, or a quote from a famous Russian if it is Sarah’s chapter. In this way, each voice is distinct and the reader is never confused by the shifting points of view.

Anna travels to Moscow in 1980 for a few months to study Russian language at the Institut Imeni Pushkina, but also seeks to come to terms with her family history:

I wanted to return to the country where my great-grandmother died, alone on a boat, raped then murdered in the little town of Gornostaypol. I wanted to understand how her tragic, unspoken life had affected my own.  (10)

Anna is haunted by the past, but also in need of an escape from her stepfather and in pursuit of a romantic notion.  “In Russia, I was sure people didn’t talk about money but instead spoke of the soul in half-lit, smoke-filled rooms.” (8)

However, she quickly learns that Soviet Russia is not the stuff of romance, as she suffers sexual assault, comes to terms with government surveillance, and observes the bleak lives of other young people, Jews and Refusniks. Anna feels a deep connection to Russia and her new friends and yet, there is no joy to be found there.

We meet Sarah in 1915, shortly before her mother (Anna’s great-grandmother) is killed in a pogrom, and follow her reluctant emigration to the U.S where she falls in love and marries, but can’t shake the sadness of her past. Sarah’s husband, Leon, excited about the revolution and desperate to save his wife from her depression, moves the family back to Russia, now the Soviet Union, to help build the new communist empire. Unfortunately, they find that life is not as rosy as promised, and eventually they return to the U.S.

Eventually, these two stories merge and we learn the ending of Sarah’s story as Anna discovers it herself in Russia. As soon as I finished the book I flipped back to the beginning to put the pieces together.

I chose this book because my own family emigrated from Russia at about the same time period as Sarah, and I grew up in the US in the 1980s when the Soviet Union was the evil empire and yet I still felt a longing to understand my family’s homeland. I could easily slip inside Anna’s perspective, yet I found Sarah’s chapters to be the most compelling of the two voices.  The overwhelming feeling of this book is a haunting sadness, a multigenerational melancholy. The writing is taut and the story is well-paced. I found the dual perspectives to be intriguing and really added depth not only to the women, but also to Russia itself, which becomes a silent character in the novel.

L. Bordetsky-Williams is the author of the memoir, Letters to Virginia Woolf (Hamilton Books, 2005); The Artist as Outside in the Novels of Toni Morrison and Virginia Woolf (Greenwood Press, 2000); and three poetry chapbooks The Eighth Phrase (Porkbelly Press 2014), Sky Studies (Finishing Line Press 2014), and In the Early Morning Calling (Finishing Line Press, 2018). She is a Professor of Literature at Ramapo College of New Jersey and lives in New York City.