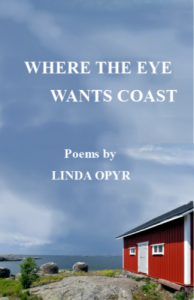 In Where The Eye Wants Coast, her eighth collection of poetry, Linda Opyr presents poems that are quietly but powerfully wrought, a collection of transformative moments summoned by life’s seasonal gifts and losses. Published as Covid-19 was emerging as our contemporary crisis, these poems hold a special poignancy for their reverence of the ephemeral nature of existence and those rites of passage that become more precious even as they recede with time.

Opyr’s craft is in creating lines that shimmer like gossamer while they gently anchor the reader to the intangible aspects of our lives. In “Have You Time” she writes “Your passing is as much and as little as/the spill of moon silver on bark of birch,/ an uproar of sun at the line of sea and sky ” [p. 12] and from “At The Root of My Watching” we see fall arrive “…in the golden shimmer of a moment/ borne on the backs of green leaves.” [p.13] Respectively, the poems bring us close to something immense that “falls between the cracks of sand” and “what was almost missed or forgotten./ Or remembered beyond reason.”

Love and longing in its various, eloquent guises glide across the page in silken language. From “In Loving You, I Find Countless Ways:”

To whistle birds into song and remember
the silver whisper of the rain.

Wave upon wave of ways
to touch the soft arms of the sea.

Breeze upon breeze of breaths
losing themselves in the wind.     [p. 51]

The maternal bond elongates from the corporeal to the spiritual, with the world blossoming in exultant gesture in such works as “On the Night Kate Was Born:” “I stepped out into/ the roundness of moon// and blooming of lilac/ on soft wind,// new leaves cradled/ on each tender branch.// In my heart I held you, Kate./We saw the stars.” [p.48]  In “Dear Child” harsh life lessons unfold in lyrical lines that are both cautionary and calming, evidence of a mother’s “sharp-toothed gales of her fierce, fierce love.” The poet explains:

Sweet child, I taught you to cry because tears
carry the salt that will keep you human

when the cold wind pries at the rusty hinges
of your heart, that door you leave to swing in the rain.

The profound wonder of grief floats through many of these poems, with an intense intimacy that saturates the page with graceful detail. “The Stranger” bears witness to a home’s transformation through the stages of its inhabitant’s life, from infirmity to mortality. A life is presented through the evidence of change, from the appearance of a ramp to the front door that is “glistening” in morning sun, to “…black plastic bags,/like mourners,…” that are “lined up at the curb,” to when the “…darkness staring from windows/ tells of the meal not cooked,/ the plates in their cupboard.//The living room empty.” [p.23].  In “Something Changed”  [p24] the poet faces an unanswerable question roused by the prospect of unfathomable loss.

The  light shifted
into shards of shadow.

The trees spread their dark sides
to the earth before me.

How will I breathe
when your breath is gone?

The poems in Where the Eye Wants Coast cautiously measures the ineffable distances between longing and memory, carefully marking the exultant and elusive passages of life’s fleeting territory.