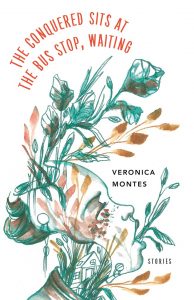 Veronica Montes’s The Conquered Sits at the Bus Stop, Waiting, winner of Black Lawrence Press’s Spring 2019 Black River Chapbook Competition, includes eight pieces of flash fiction. Her first collection, Benedita Takes Wings and Other Stories was published in 2018 by Philippine American Literary House. Though Montes’s rich language and startling imagery are arresting, it is the women themselves who compel the reader. Perhaps it is the rigid requirements of the genre, but these characters do feel isolated. Thus, an intimacy exists between them and the reader. Montes’s stories are also reminiscent of the oral tradition whose earliest practitioners would have missed the tales on these pages.

Some of Montes’s characters exert their own power in a world where they have little, women who, like the protagonist in the collection’s titular story, were “young once, tender-skinned” until “the men came one after another . . . extracting gold (1).” This woman, in this story, at least, is finally left alone, and if she is spoken to “will cover her eyes as if you are made of sunlight” (1).

She seems a generation removed from the wife in “The Sound of Her Voice” who resorts to sign language when her voice disturbs her husband and to in the mother in “Lint Trap” where a character wonders what might be done with the “detritus of her family’s T-shirts and socks” (4). Although she claims that she lacks any creative gifts, amidst the mundane duties of her day, she is inspired to imagine possibilities from craft projects to homespun Botox. Perhaps one of her fantasies might be the time when she is able to sit at a bus stop refusing to make direct contact with anyone who intrudes on her well earned peace.

In the mythical tale, “Madaling Araw” (the Tagalog word for dawn), a woman awakens on a bed of crushed glass, and attempts to rinse away the shards in a lake:

Her hair, like her mother’ before her, was thick as twisted rope, and the back of it

glittered with sharp bits. The tamsi birds called to each other as she shook it out,

excited by the way the glass arced through the air, catching sunlight along the way (6).

The story shares its name with the 1909 Tagalog-language novel written by Filipino novelist Iñigo Ed. Regalado which deals with issues including severe poverty that were present during the American period in Phillipine history. The pain that Montes’s protagonist endures leaves scars, but she heals herself with her mother’s remedy, the oil found in the leaves of tsaang gubat and confronts the colonizer by facing east to ask: “Do you see me standing here”(6)? Do they see what they have done, she might also ask? Do they see how strong people survive despite them? In response, “their hearts thrummed with the knowledge of their wrongdoing”(6) though there is little indication that knowledge will transform them.

In other stories, too, women reclaim their power through experiencing first and “feral love” (16), or having passionate sex with a “scratch-and-sniff boy, this all-you-can-eat buffet boy” (12). They allow themselves to grieve despite that others see such sadness as too much.

However, in “The 38 Geary Express”, we are reminded how powerless women remain. In this, the only piece told from a male point of view, a stalker writes a note to his obsession: “I have been watching you have you noticed do you like it” (13). She asks to be left alone but Montes writes:

her, as if they would stop him from slipping into the seat behind her on

The ordinary details of the city — children in light up shoes, women with plastic grocery bags — are juxtaposed with this man’s clear obsession. He knows when the girl eats, where she will stop to check her phone along her route.

In this story as in every piece in this collection, Montes employs a poet’s eye for the evocative detail. With restraint, she achieves startling moments of beauty, terror, joy, redemption. Even in such a slim volume, Montes’s chapbook offers a world of women, young and old, tied to their history or freed from it.

Carla Panciera’s collection of short stories, Bewildered, received AWP’s 2013 Grace Paley Short Fiction Award and is available from the University of Massachusetts Press. She has also published two collections of poetry: One of the Cimalores (Cider Press) and No Day, No Dusk, No Love (Bordighera). A high school English teacher, Carla lives in Rowley, MA.