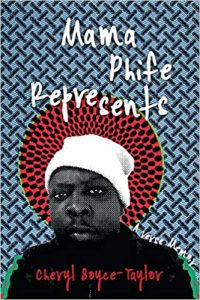 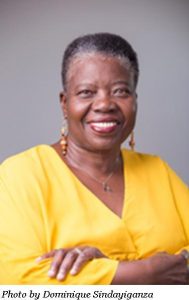 In Mama Phife Represents, Cheryl Boyce-Taylor, an island woman from Trinidad, a mother, wife, friend, poet, an artist, gives the world a peek inside her grieving heart after the death of her beloved son, Malik Izaak Boyce Taylor, known globally as Phife Dawg, the underrated soul of the acclaimed hip-hop group A Tribe Called Quest. As she mourns her public-figure son, mom’s world crumbles into a sea of vivid memories, a sea of infinite tears and a sea of sad faces around the world saying, in an attempt to console the inconsolable, “Sorry for your loss.” In “Apricot Begonias,” we hear the trite line mix with an unmooring, and we’re de-centered as well.

The world is grieving now, but many struggle with it. Rote, auto-pilot life instructs us to say common, safe things when someone we know (or claim to know) is mourning after a death, including the sudden death of someone as young as Malik, who was snatched away by diabetes at age 45 in 2016.

But should we say the same things to a mother who has lost her child, the boy and the man? The child she vowed to raise in a different way than she was raised: heard and free in Queens, N.Y.? And what if in the years that followed his birth, the sentient, free and talented life she nurtured became her friend, her pride and joy, her family guru, her anchor, her grace, her laugh magnet, her teacher? In “When Her Child Dies,” we feel the depth of such sorrow, a loss like no other.

when her child dies
a woman will fight for her sanity

she will travel to Anguilla
beg Yemaya to bring him back

The world might have known Malik as Phife Dawg, the Funky Diabetic, the Trini Gladiator, and a list of other dope MC names, but in Mama Phife Represents, we learn that he had what we all want: not fame, but to be truly known, respected and loved. He experienced this through his mother, and she misses him so much. In “You Ibeji Son,” Boyce-Taylor speaks to Malik, peeling back layer after layer of the intricate man:

You Diggy Dawg
You home house
You soca-hip-hop
You Ali boxing glove  Wop
You 33 LP
You Trini Gladiator
You Rhythm Kids
You Dr.Pepper
You fig leaf
You we are learning to live without (p. 92)

To read the book is to hear Boyce-Taylor’s heart shatter into a million pieces since that terrible day when the phone rang and then wouldn’t stop ringing. And then we feel her heart be sutured back together with a memory of Malik telling her on the phone of an absurd encounter in a grocery store involving a rude line-cutter who didn’t know who he was messing with. The relief the reader might feel when reading that Malik’s cerulean robe has taken the place of a yearned-for hug is like that from a weighted blanket — something to ground you and hold you together so that your heart doesn’t break into a million pieces too.

The book, a compilation of poems, essays, handwritten notes and letters, fragments of life and love, takes the reader on a journey. Around the world, through life and relationships, mapping human hearts.

Boyce-Taylor shares that, in the beginning, she hid her pregnancy from her mother. (She was pregnant with twins; Malik survived, Mikal did not.) But there seems to have been little to no hiding between mother and son. It was a special relationship that flowed so freely, strong, full and significant like the Nile or Phife’s rhymes; the life of Ibeji’s son was surely sustained by Oshun.

Indeed it is Malik and Boyce-Taylor’s special relationship that flows through this book. A relationship so connected, deep, firm and tender that as we let the words about a mother’s undying love wash over us, we can read between the lines and hear Malik pouring his heart out about her too.

Nadia Wynter is an editor, critical thinker and lover of living things from Queens, N.Y., currently living in Oakland, CA.