To whatever two-legged and four-legged souls that walked by, I must have been a spectacle. A grown woman lying face down on the beach. Hadn’t even made it to the waves. My zigzag trail of shoes, sweater, and face mask signposted my route to this very spot. Borrowing an iota of willpower from the newly hatched turtles I had seen on National Geographic Channel and their flipper-frenzy dash to the water, I willed myself to, at least, open one eyelid. And that was it. Willpower depleted. I was no newly hatched turtle, but something had surely drawn me to the sea. Salty air tiptoed up my nostrils. The taste of it lay tart on my lips. Proximity made boulders of the grains of sand, just millimeters from my eyeball. Crashing waves meted out a steady rhythm somewhere in the distance beyond the boulders. A childhood memory loosened and tumbled into my mind. Kid versions of my sister and I, on a beach, on the east coast of southern Africa, ran around in my mind. We finished chasing each other and collapsed face down, eyeballs millimeters from the sand and fingers intertwined. Our giggles transformed the image into frothy bubbles that dissolved the memory as they popped. Before she left, her sweet voice called out from the past, “They look so big, but they are really, really, small.”

I was over ten thousand miles away and lay near the Atlantic Ocean, not the Indian. My hands were empty. My womb was empty. There had been a hatchling, but it had not made it. The emptiness remained long after my body healed. An abyss that no one could see. I did a fairly good job impersonating myself, but the abyss could not be filled. Not with brunches, nor happy hours, nor spa days, nor reality show binges and not with cheesecake. Then Covid came. My house became my island. The pandemic washed away the drawbridges to leave me blissfully alone. Then came Netflix binges, home facials, and too many social media baking challenges. Band-aids. Each subsequent distraction lost its effectiveness faster than the previous one. Listless in my indoor cave, I found myself at the screen door staring beyond the parked cars and down the street. No humans stirred. My neighbors marooned on their own islands.

My glance strayed absentmindedly over the brilliant green lawn when a rustling of the blades drew my eye. A squirrel unfroze. He bounded the length of the yard and scurried up the nearest tree trunk. A bird with blue-tipped feathers popped her head up from the grass with a prize in her beak. She flew up to my rain gutter with the worm. A chorus of chirps erupted to greet her. She returned to the ground and with expert precision hunted several more worms. I found myself at the screen door more often. Reasons to wander outside presented themselves. Water this. Trim that. Eventually, I just surrendered. I became a daily golden-circle ticket holder to the tiny theater show as the birds and squirrels reclaimed my quarantined neighborhood. I heard the call the first morning that I did not wake up to birdsong. The rain gutter near my bedroom held an empty nest. Green leaves replaced the puff of pink blooms on the Dogwood. And when my screensaver cycled to a stock photo of a Hawaiian vista, it was the clincher. The sea was calling.

Crunches followed by a crashing sound, preceded the sting of sand against my arm. Someone lay next to me. I did not move. And I did not have to wait long to find out whom.

“Turn over, there’s more on this side,” said the child.

Doing as instructed, I flipped over like one of those fragile pancakes that might break apart on the spatula, but miraculously does not. As I squinted at the bright sky, someone called to the child. He ran off in a scurry of sand spray. No goodbye. Sadness was gray. Gray sky. Gray mood. An absence of color. It always bothered me that the phrase having the blues portrays sadness. Confronted with the cerulean sky arcing over me as far as I could spy, something shifted in the abyss inside. Something welled up from it and I drank of the waters of courage. I lay in an enormity of blue until the aperture of my heart adjusted and opened. Then I raised myself up. Wading in until the waves lapped at my knees, I offered up my pain and my story, as pilgrims do, at the holy rivers of the world. Enveloped by the water and the sky I was no longer gray. I filled with blue. The things that had filled my vision shrunk to their true size. 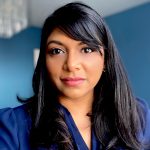 Keshni N. Washington’s stories are influenced by the two hemispheres she calls home. Born and raised in South Africa, she now also considers Washington D.C. home. And after eight years here, has finally gotten used to Orion being the right way up in the night sky. Published in Yellow Arrow Literary Journal, she is a VONA (Voices of Our Nations Arts Foundation) Workshop Alumnus and hosts The Signal Fire Series podcast.