I have communicated with those who would know. Mama and Papa and Harold and Alice were welcomed in the afterlife, following their harrowing deaths. Their souls were luminous. They said that Mama ascended in the most beautiful sea-green, diaphanous summer dress that ever there was, that there wafted an aroma of gardenia and that there was an infant ready to become the new vessel for her soul. I was heartbroken not to have died at Mama’s side as I had always planned to do. I had accepted the near certainty that I would leave Mama alone in this life one day, gladly wait at the gate to the Bardo, and rejoin her for another existence if I proved worthy. Fate is Fate, they say. But Mama’s life was taken away too early. Mama was shot to death.

I am known as Maisie, a bitch aged two years whose father was a brindle bull terrier who mounted her chestnut brown, round-eyed mother of undetermined origin and gave her a whelp of eight beautiful puppies. I had my sire’s white chest, tiger stripes, and blunt face mitigated only by Mother’s soft, liquid, brown eyes. I combine my mother’s quiet, contemplative nature and devotion to good behavior with my father’s lively, inquisitive demeanor. I’m a superior companion dog, as well able to play fetch ball with twelve-year-old Harold and sit quietly for seven-year-old Alice to pin ribbons to my head. I was well-behaved and dignified with Papa. I was devoted to Mama. She is the person who chose me from the litter instead of any of the others. “She is so different looking,” Mama said. She held me high above her head in one hand. My poor stomach lurched, then she brought me close to her bosom, and I caught her in my nose, sniffed and smelled, inhaled her, nuzzled her, and loved her. She nestled me between her breasts. She tickled my ears with her long brown fingers with carefully filed and buffed nails coated in a clear lacquer. I have held the recollection of that blissful moment in my nostrils ever since. I loved the entire Bazemore family, but I was Mama’s dog.

I chuckle to recall the day when, sitting together on the porch shelling peas, Mama realized I was to be a mother. “I was going to have you seen to, girl,” she said while rubbing her hand along the small rise in my belly. I laughed to myself. How could she have known? With her woefully inadequate nose, of course, she missed the moment. I found her olfactory dim-wittedness to be charming. I have this one better talent. It was I who smelled the kerosene before the firebomb was lit.

I was most fond of lying as still as possible while Mama would glide her soft, warm right hand the length of my body. Mama’s hands were capable of a vast range of patting, stroking, gently ruffling, softly tickling, cupping my skull. Her hands were typically occupied most of the day with some activity. When Mama took a moment or two for a blow, a pause for rumination, she was calm and rhythmic as she drew her fingers across my body. I was most often on most days at her side, only answering to my urgencies in the yard or taking off to play with the children at her request. “Go out and play, all of you all,” she’d say when she was tired of us underfoot.

It was to be a peaceful pregnancy. Mama made plans for the little squealers with friends and acquaintances. Our puppies would not become Tulsey Town street dogs. Mama’s cousin, Althea, who lives in Tecumseh, said that she would have one. Though they couldn’t vouch for the sire, Mama and Cousin Althea had a lot of praise for my litter. “Oh, Maisie’s puppies will be beautiful. You’ll see, Althea, “Mama said. “And don’t I know it, Ella,” Cousin Althea answered. They smiled at me. They patted my head. They gave me biscuits and sausage.

And then, the worst happened. Some people in Tulsa descended upon the part of town where we lived and began to burn it down. Our house and business, The Samuel Bazemore Funeral Home, went up in flames. All along Greenwood Avenue and Archer Street, homes and businesses were burned and looted.

This had been building. Any progress by Black people was seen as a thing to stomp. That’s what they did in Tulsa. And Mama and Papa and Harold and Alice and I packed up and left Tulsa to go back to North Carolina. I whelped my litter in transit, and Mama and I agreed to leave them on a farmhouse porch sure they would be taken up and cared for. On the road, in Missouri, just outside of Springfield, Mama and Papa were gunned down. Harold and Alice were shot to death, too. I was chained, muzzled, and hauled off by one of three white men who had shot Mama and Papa and Harold and Alice. This was done – as near as I can stitch together – because they didn’t want us to spread word of what happened in Tulsa.

My last image of Mama that is seared into my brain is her hands as they rose in concert to protect her face. They froze in mid-air. She seemed to be looking at them in disbelief. The palm reader had said she had a long, long lifeline. The spot on her chest was red; it grew larger and a surprised look. 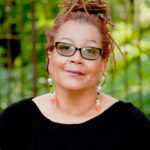 Breena Clarke is the author of the novels, Angels Make Their Hope Here, River, Cross My Heart, and Stand The Storm. Clarke is a member of the fiction faculty of Stonecoast MFA in Creative Writing at The University of Southern Maine. She is a founder and organizer of the Hobart Book Village Festival of Women Writers and editor of NOW, a journal of the work of HFWW. www.BreenaClarke.com